I remember when I first stumbled over Dr. Feelgood sometime around 1974 when Prog Rock had arguably reached the peak of (imo) pretentiousness and even the more proletarian manifestations of rock music were generally subsumed in a sea of glitter and tack. It was like a breath of fresh air and I must have just about worn the grooves of their first LP white with continuous replaying on the old dans 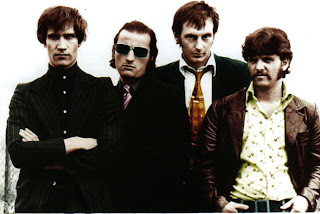 ette record player that our parents had bought us some ten years earlier on the strict condition that we wouldn't defile the old homestead with anything more wild than Millie Small's "My Boy Lollipop".

Anyway as far as I was concerned the Feelgoods were the business, they had a nicely revivalist thing going with their ongoing homage to Chicago Blues and good old Rock n Roll with some fabulously ironic wordsmithing by their guitarist Wilko Johnson whose choppy and distinctive style of guitar playing owed much to the legacy of the pre beat group school of rock guitar as best evinced by the legendary Mick Green (of Johnny Kidd and the Pirates fame in case you didn't know) but where they really scored big time was with their stage act, a rock solid rhythm section that looked like a plumber and his mate and a demented guitarist that would skitter about all over the stage looking like the Dauphin on speed fronted by a lead singer in a filthy suit that had all the menace of a man that's woken with a blinding hangover having spent the night in a battered Capri in the back of a pub car park. It was one of those bands that you just had to see. Here's why:

So going back to their first LP titled "Down By The Jetty" with the picture of windblown Feelgoods with a lovely backdrop of Canvey Island where they and their white transit hailed from. On the back of said record sleeve was the first appearance of their soon to become high profile logo. It was one of those weird moments as a dim memory was gently nudged deep in my subconscious. I knew I'd seen it before. 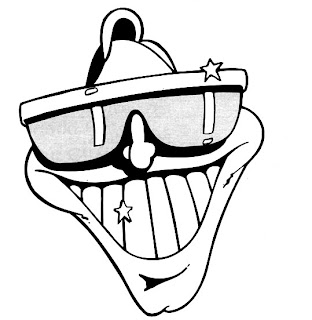 Of course it was "Plastic Sam" from Mad no. 14 August 1954 (for you bibliophiles) but the man that worked up the logo, none other than Wilko Johnson would more likely have 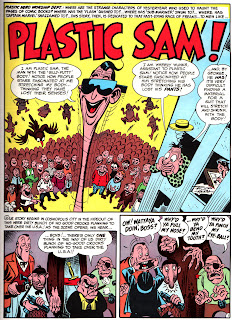 encountered the strip in one of the Signet Mad Paperback reprints that had flooded these shores for much of the previous decade.

The strip was drawn by Russ Heath who was being trialled as a possible successor to John Severin, who was no longer working with Mad's perfectionist and all round genius editor Harvey Kurtzman. This was Heath's second stab at working for Kurtzman, having blown a previous gig three years earlier with a so-so rendering of a story for the debut issue of Frontline Combat. 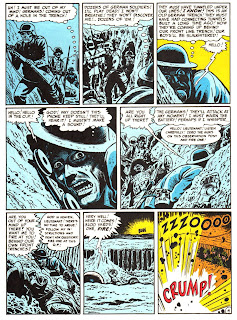 Heath's approach for attempting to ensure that the gods or at least Kurtzman smiled upon his labors, was to stick very closely, in fact slavishly close to Kurtzman's layouts which would always be supplied on tracing paper affixed to each sheet of the pre-lettered strip that the artist had to work to. No opportunity here for the artist coming up with fancy layouts - storytelling was king and Kurtzman was rigorous in ensuring his vision was adhered to.

Heath's problem was that in being so over cautious he slightly neglected to offer up anything of himself in the process, Jack Davis had this all out wacky style, Woody's stuff was similarly distinctive and tres seductive with lots of really off beat humor suffusing his work and Bill Elder was just at his best when it came to working on Kurtzman's layouts. He'd ensure that he kept to the intent of the layouts but within that structure he'd create layer upon layer of manic Elder detail as 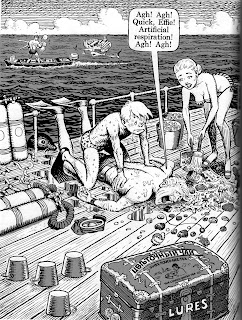 you can see here on the post Mad Goodman Beaver. Heath in contrast didn't go much beyond inking up Kurtzman's tracings treating them as pencil work to be sharpened up rather than layouts to be built upon.

Anyway the inevitable happened and Heath blew the second gig but went on to become one of the mainstays of the irascible editor from hell, Robert Kanighier and created some truly stunning work for D.C.'s
war titles and later became one of the premier artists working on James Warren's line of comic magazines as this page from Blazing Combat attests. 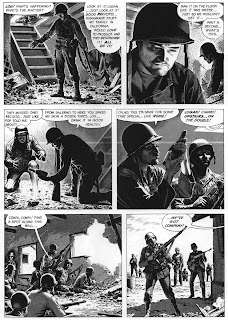 But what of the source for Plastic Sam?

We'll look at that tomorrow. 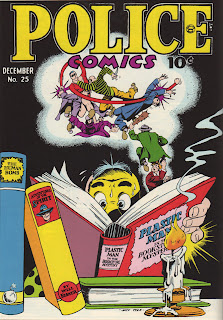