Continuing the thread first prompted by a comment from Leeann about silhouette and negative space, another illustrator with an uncanny sense of strong outline is Maurice Boutet De Monvel. 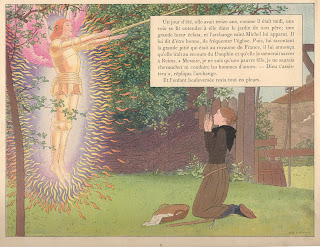 He originally trained as a painter at the Ecole Des Beaux-Arts in Paris during the 1870's and developed a highly sensitive and fashionably sentimental approach to his craft as is evidenced by the example below of his early work. 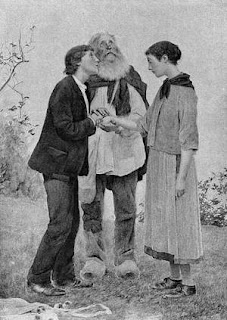 However it was portraiture and particularly children's

portraiture that was to occupy much of Boutet De Monvel's career and the way he achieved this was somewhat serendipitous as it was via a foray into the rapidly burgeoning market of children's book illustration that was occurring in France as much as elsewhere in the civilized world at the end of the nineteenth century.

After creating several truly charming child orientated artworks for mass circulation magazines he received commissions to illustrate two books on children's songs which were so successful that they were translated into English and remained in print for many years thereafter. 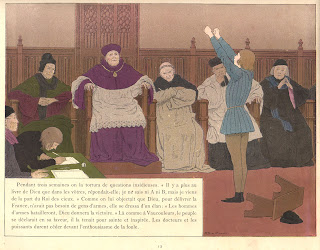 The success of these books was such that he was then in receipt of numerous solicitations from the landed and wealthy as they sought De Monvel's skills in immortalizing their children on canvas. This put De Monvel into the enviable position to be extremely judicious in the kind of illustrative work he was prepared to consider. He created one more book and this was not only a

true labour of love but his piece de resistance and a book that was to have a profound effect on the development of children's book illustration as well as the development of comic strip."Jeanne D'Arc" was published in 1895 and in the wake of the Franco Prussian War made an immediate call on French national sentiment, although De Monvel was neither a historian or a writer the passion and sheer storytelling power that he brought to bear on this creation were second to none. In these magnificent artworks you can see clearly the profound effect that exposure to the graphic line and subtle use of colour by Japanese artists 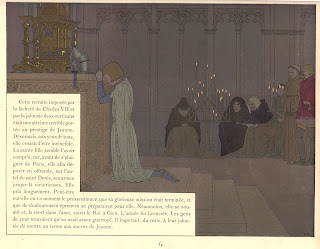 such as Hokusai had exerted on De Monvel's generation. These figures really emote via attitude and gesture rather than their relatively muted facial expressions and it is the clarity of their outline which so masterfully carries the narrative that really connects you to what they are feeling and where the story is going.

The enthusiasm and recognition that De Monvel's "Jeanne D'Arc" received was such that he was invited to travel to the U.S.A. in 1899 and was subsequently commissioned to recreate several of 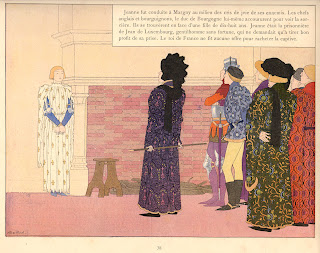 the illustrations from the book as large scale panels which are now part of The Corcoran Collection of Paintings in Washington D.C. 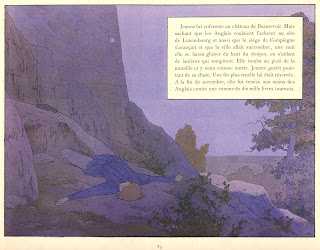 De Monvel died at the age of 63 one year before the outbreak of the First World War, when once again French National sentiments would be brought to the fore of public consciousness.

Posted by Peter Richardson at 09:59