Leeann made an observation a couple of postings back about use of negative space and the strength of uncluttered silhouettes ... and it got me to thinking.

I thought about it even more after I posted Winsor McCay's New Year Little Nemo. Here was a guy that was such a master draughtsman that he instinctively drew his figures in silhouette before filling in the details, which for both comic strip and animation work - McCay's particular areas of expertise - is essential. 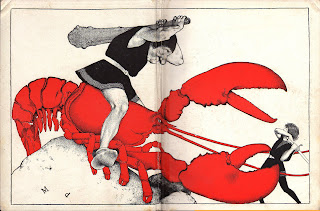 roughly contemporaneous with McCay and it began to dawn on me that they were all real masters in terms of constructing work with a strong sense of silhouette and inventive use of negative space. I'm assuming here that everyone knows what negative space is but just to be sure - it's the areas around a shape rather than the interior of the shape, but ultimately this area is every bit as important as the shape - it's just easier to forget as all your attention is devoted to attending to the contents of the shape your drawing. If you think about it for a moment that's why McCay's preoccupation was the outline of what he was drawing - he was all too aware of the importance of negative space. 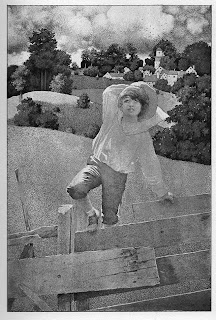 Here's another consideration, the middle classes at the turn of the last century in a world where at least a smattering of the arts and a degree of manual dexterity were considered desirable accomplishments, were in a weird way actively encouraging their children to appreciate negative space. Children were encouraged to master the craft of cutting things out, they could construct toy theatres from pre-printed sheets which required careful and judicious cutting, they could adorn dressing screens with cut out figures, they could even attempt mastery of the art of silhouette by cutting heads out of black card; a particular skill which would capture the imagination of many a child when encountering a master of this discipline at some local fair or carnival. All this requires careful analysis of the areas you are cutting out - the negative space.

All these skills would have co 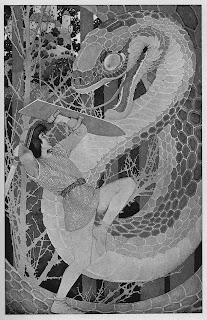 me as second nature to the illustrators of the 1890-1900's and it certainly informed their artistry. I'm going to show you a few samples of an exemplar of this approach to illustration and an artist who I first encountered via the enthusiastic proselytizing of a young tutor who I encountered during the second year of a two year art foundation course. Lucky for me it was a two year course as I was relatively crappy and needed all the help and time I could squeeze out of the system.

Mike had arrived from graduating at Brighton Art College and was full of enthusiasm and positive kharma and managed to inject me with a sense of vision and self belief that had somehow so far eluded me. Not only that but he knew a lot of up and coming young illustrators based in Brighton and apparently they all worshipped at the altar of an illustrator named Maxfield Parrish. I'd never heard of Maxfield Parrish but Mike was so dedicated to opening my eyes to the splendour of Parrish and his fantastic worlds that he actually in an act of incredi 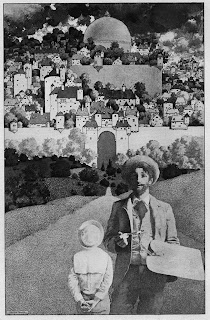 ble generosity lent me three near impossible to get hold of original editions of his work.

The illustrations that I'm reprising today come from one one of those books; Kenneth Grahame's "The Golden Age" and the magnificent end papers replete with red lobster are from Eugene Field's "Poems of Childhood". You'll notice the almost collage like 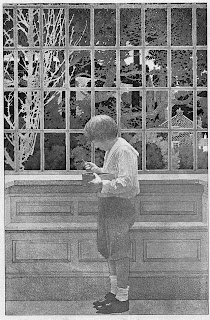 Illustration doesn't get much better than this. 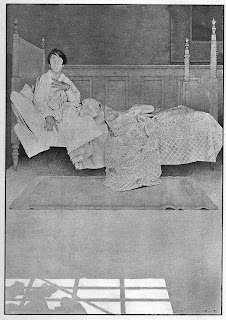 Posted by Peter Richardson at 09:48