This morning I approached this blog with only a hazy idea of what to post. This is not a good strategy, when running a blog you are really editor in chief with one of those green visors wrapped around your sweating cranium, cigar in your mouth and a clear vision of what it is you have to offer your readership that is going to be worthy of their time. 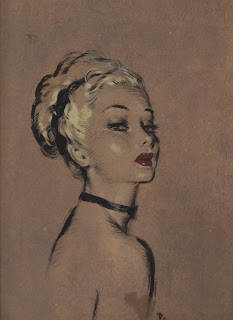 This was not the case this morning, first two ideas I ditched because much as I love the subject matter that I am predisposed to post here a lot of it tends to appear elsewhere and I don't want to find myself leading you the readership down a well worn trail, so the Kurtzman piece and the Eisner piece didn't happen, but they may well at some point.

There was however an observation I made yesterday about immersing oneself in the characters that you are creating which did make me stop and pause and think of another artist that doesn't get talked about to the same extent as Messrs Kurtzman and Eisner, who was a true genius both in terms of his artistry and his devotion to making his characters live and breathe on the page.

The artist I am thinking of is David Wright, who's newspaper strip creation Carol Day is one of those lost treasures of British comicdom (there's a large list as this nation's ingrained Philistinism on the matter of comics shows no sign of abating), so I thought a brief discourse on the great man and a pointer to a vitally important website would be in order.

Carol Day appeared in the Daily Mail from 1956 and ran until Wright's untimely death in 1967, the man literally worked himself to death on this feature. But the world and more specifically the England that he created in this strip was redolent of an exotic and faded grandeur, where crumbling mansions harbor bitter family secrets, the headlamps of luxurious saloon cars knife their way through fog shrouded streets and more than a hint of scandal attaches itself to the succession of glamorous people that so enticingly inhabit it's panels. 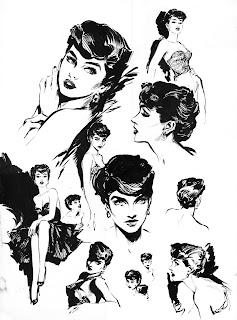 I mean where else in the 1950's would you find a strip where the heroine was engaged to one man but conducting an affair with another, who by the way was married and on top of that was a complete flake?

And all this in the pages of the Daily Mail!

David Wright's Carol Day is a masterpiece and the good news is you can read much of it at Roger Clark's amazing Carol Day website - so please check it out - no damage to credit cards will be incurred. 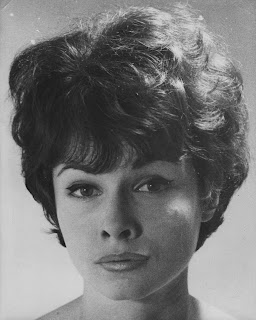 In much the same way that David and I are doing with Cloud 109, David Wright made use of friends and family, his sons and their partners, ex-partners whatever, along with real life celebrities such as Memphis Slim (Wright was a huge jazz and to a lesser extent blues devotee) as well as the boxer Henry Cooper, musician Burl Ives and even fellow artists such as Tony Weare who was drawing the Matt Marriot strip at the same time. 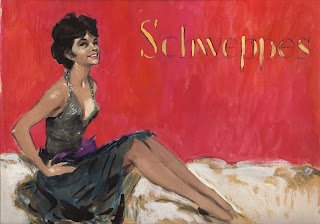 Here then is a selection not so much of Wright's Carol Day strip which is best viewed over at Roger Clark's site but at some of his other commissions involving beautiful women, one of whom the girl in the photo was modeling for Wright and going out with eldest son Nicky who was the guy that photographed the Rolling Stones against black background with Gainsborough like lighting and pose for their debut LP - but that as they say is an altogether different story. 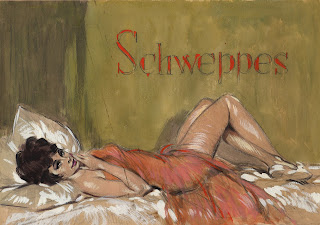 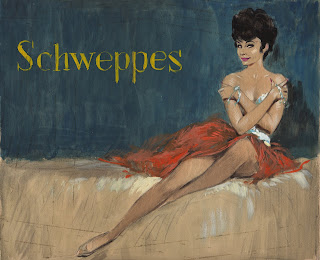 and body paint for Scweppes with son Nicky's then girlfriend modeling.
Posted by Peter Richardson at 09:17