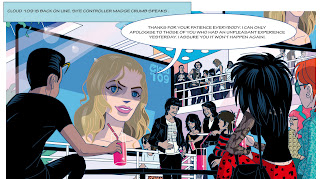 The more eagle eyed amongst you will have noticed the figure of Mick Jagger descending the stairs in the first panel of what is page 9 of the ongoing epic a.k.a. "Cloud 109". However this is not just any old Mick Jagger, this is the Mick Jagger of late 1968 frontman for a band that despite heady success and being the coolest bunch of individuals on the planet at least as regard the collective consciousness of 1968, had been off the touring circuit and off the nation's screens for much of the previous two years apart from numerous court appearances on a succession of drugs charges. 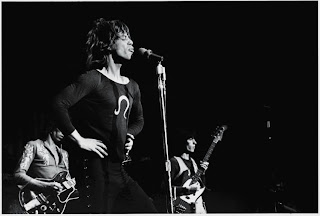 Guitarist and all round musical whizz kid Brian Jones had been the founder and driving force behind the Rolling Stones at least until their street savvy and sharp as a stiletto manager Andrew Loog Oldham had arrived, after which it was all downhill for Brian. By November 1968 both Oldham and Jones were history, Oldham's managerial talents now being the provenance of the very shady U.S. accountant Allen Klein and as regards Oldham's record production duties, well they were now considered redundant by Messrs Jagger and Richard. Jones in the meantime was succombing to the rigours of a continous cycle of pills and booze to alleviate the pain of having lost his band and his girlfriend Anita Pallenberg, now happily shacked up with Keith Richard who along with Jagger were the driving force behind the Stones fortunes.

And while Jagger and Richards who had been famously busted a year before kept a low profile, poor old Jonesy just wasn't in a state to take appropriate precautions. As a consequence of the unceasing attentions of the long arm of the establishment the hapless Jones was a frequent guest at various judicial hearings.

All of which meant that as a result touring was problematic to say the least, the convictions meant that the U.S. was out and anyway they had a barely functioning guitarist and as if all that wasn't enough they had an enormous tax bill to pay which with typical bohemian fecklessness they were ill prepared to deal with. A problem exacerbated by the alarming realization that the money they thought they had was now no longer available courtesy of some Byzantine accounting schemes set up by their shady U.S. accountant/manager.

So creating new product and promoting it effectively was the route to at least some chance of being able to continue and to this end and with the much delayed launch of the album that was to restart their career the Stones needed a TV outlet, they couldn't visit the States so UK TV was all they had and as November hove around the slot most likely to provide this springboard was LWT's David Frost Show.

The resulting performance of "Sympathy for the Devil" was mesmeric, it was only ever broadcast the once in it's entirety but it's effect was spectacular and was talked about for years after by those obsessives who soak up every aspect of a band's creative output. The general assumption was that it was yet another casualty of the practice of wiping video tape to save money that was de rigeur throughout TV studios at the time. That was until a snippet appeared on a French TV documentary some ten years ago. One or two other snippets appeared but it wasn't until about a year ago that a 21 year old Russian Physics student started networking with collectors all around the world in an endeavour to gather up all the bits and edit them together that a serious attempt was made to show the rest of the world one of those seminal moments of rock history.

So here it is, the whole performance does exist but due to the usual legal hurdles this is the most we're going to see for the moment.

Posted by Peter Richardson at 08:33