O.K. I'm going to 'fess' up and admit to the fact that the muse of blog inspiration has temporarily deserted me and as a result you are going to be treated to yet another dalliance with some of the stuff that pointed me in the direction of not having a proper job but pursuing a career in illustration instead. 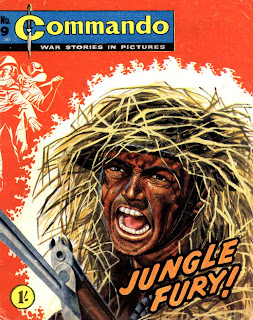 As I mentioned last Saturday, comics in the late fifties and early sixties were in the U.K. unbelievably good. There were comics aimed at a variety of young readerships and all of them featured really inventive, character driven strips with artwork which at it's peak was simply unbeatable. The comics were so good that frequently and certainly in our household, the first reader would be your dad.

Not all comics received such parental endorsement and th 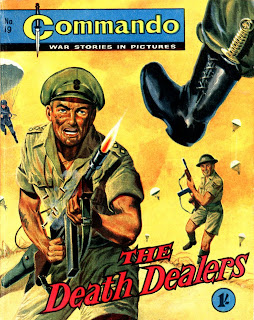 ere was one genre of comics in particular that were regarded with real approbrium by, if not your parents, then certainly your teachers. These were of course the aptly named pocket libraries which by this time were pretty much universally fixated with tales of derring do from the then still relatively recent Second World War. These comics were small enough to be carried in your school blazer pocket and carefully inserted into the pages of whichever text book was required for the classes you were so reluctantly obliged to attend - you can see why they were such a bete noire with the teaching profession. 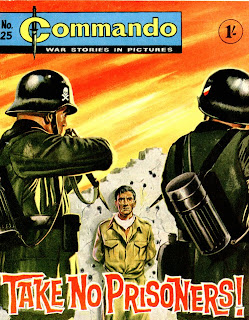 ease than it's contemporaries, it has to be the then young contender Commando comics. They were the brainchild of one "Chick" Checkley an editor working in the juvenile division of Dundee based D.C. Thomson, Scotland's largest publisher of newsprint and periodicals. Inspired by the success of their southern rivals Fleetway Publishing's War Picture Library, Commando was launched by Checkley utilising the talents of many of the same writers and artists but adding in some of their local talents to advance the vision that Checkley had for imbedding his comic into every schoolboy's subconscious.

Pre-eminent amongst the Dundee based talent was the man responsible for several of the innovations that made Commando more than a mere imitator. Ken Barr was the man who came up with the distinctive stilletto logo and panoramic cover painting format. 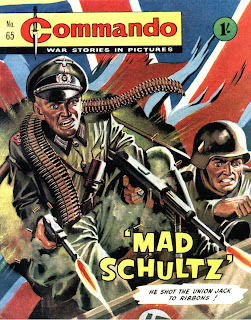 Apprenticed as a sign writer upon leaving school at the age of sixteen he was by the time he commenced work for Checkley an illustrator of formidable talent and drive who had a passionate regard for U.S. comics and pulp magazines.

And it was his ability to inject every cover assignment that Checkley put his way with an in your face over the topness that made Commando comics so distinctive. Classic Barr covers would feature demented Huns, in full Nazi regalia, buggin' eyeballs, clenched jaws, blazing guns and enough tungsten lighting to sear your retinas. The net result was sheer magic, his cover art screams non PC ... and it works in spades.

So here's some of those classic covers again for your weekend delectation ...
Posted by Peter Richardson at 08:37