Putting It Into Perspective 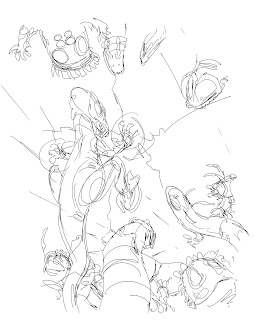 Looking at the top image from yesterday's posting, reminds me of how daunting some drawings can seem. But often they are a little easier than you first suspect. For me the most essential thing when undertaking an extreme perspective view such as this is to find anyway you can of establishing the perspective. With the monster image it was the rain drops showering down that created the grid that I worked around and with those in place it was really easy to follow through with the rest of the drawing.

Here's the initial scribble that I did, really just concentrating on the monsters whilst establishing those all important perspective lines via the rain drops, I know I did a separate drawing for the figures but it has got lost somewhere in cyberspace b 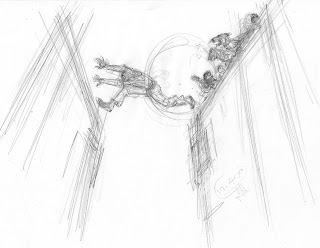 ut this is the guts of the thing.

There was another job I did for a New York ad agency earlier in the year, where again extreme perspective was called for. Here's my original pencil scamp followed by the Photoshopped tonal visual I presented to the client and here's the finished artwork. I wanted a really gritty feel to this thing and opted for a hand drawn approach which would capture the essence of my original pencil drawing and again Manga Studio (which retails for about £30.00 introductory version) came to the rescue. The art director's only request was could I make the walls further apart, I did and he came back with an even further apart request. 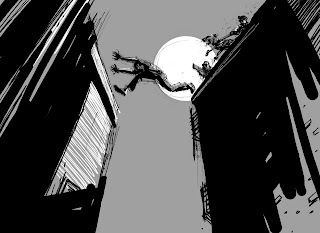 My sympathies were entirely with the jumper... 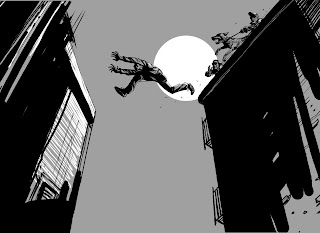 Posted by Peter Richardson at 09:35