A Matter of Timing 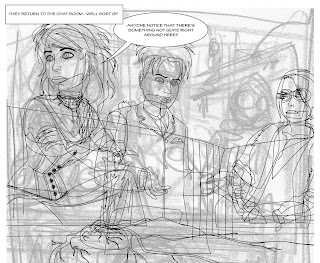 It's one of those mornings when I wake up to the feeling that I'm not really going as all out as is required to make my self imposed deadlines. So time to set myself some real deadlines numero uno being that I'm going to get page 19 completed by tomorrow, whilst still working on the horribly involved comic strip that I am doing for The Royal College of Anaesthetists. This is yet another of those jobs where everything has to go in front of a committee all with their own particular ideas on gender, ethnicity and disability, which when I look at the brief they have supplied me with leaves a lot of these decisions that I know are important to them, entirely open to conjecture. Bit like being sent into a minefield with a broken stick and a rusty penknife and a blindfold to help you on your way.

So here we are with page 19 - not much further on since yesterday's posting, I kind of rewarded myself with another go at it last night after a day's work on paid projects, but as it progresses you will see where this thing is going - promise!

In the meantime here is another little item that I've been working on, namely the graphics for Mr Oliva Spleen's new(ish) band Pink Narcissus. The first time I was made aware of Oli was when I read a review by a girl who had seen one of his gigs during which like some depraved prestidigitator, he produced a length of salami sausage from his posterior bit half of it off and flung the rest into the audience. After that, as she said, she was hooked. The second occassion she witnessed him in action, she was initially somewhat disappointed as he seemed kinda restrained in contrast to his previous performance. However her spirits were raised when it became all too apparent that the reason for the restraint was an attack of biliousness which was relieved when he commenced projectile vomiting over the audience and then launched hi 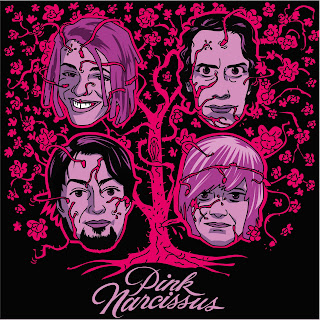 mself off the stage and onto the now very slippery floor.

I've not as yet plucked up the courage to attend one of Oli's performances but I gather from my younger son Tom that he has toned down considerably on some of the more audience challenging aspects of his artistry. However the somewhat grumpy old geezers that did form his previous band have now (for understandable reasons) all left and Oli has recruited a new squad of bright eyed young men from a local music college - hence the need for the new graphics. I still don't think you're going to be seeing them on the X Factor anytime soon.

Talking of bands brings me circuitously back to the theme of timing, graphic novels, film, music - it's all a matter of timing. Getting your stuff out there at the right moment - art is always reacting against what has preceded it - get it wrong and your yesterday's papers - to semi quote Joe Strummer. Nowhere is this phenomenon more apparent than in rock music and no band has been a greater exemplar of the vicissitudes of bad timing than Eddie and the Hot Rods. A bunch of teenagers hailing from the same neck of the woods as Dr Feelgood, they burst on the scene in late 1975 and as they were even louder, younger and looked like the answer to a young girl's prayer (which arguably the Feelgood's didn't) they were hailed as the future of rock n roll and snapped up by Island Records. They had a wonderful three year career but even by 1977 the gloss was beginning to wear off, as by then the next phase of the reaction against the excesses of Emerson Wake and Palmer, Yes, Focus, Edgar Winter and all the other dinosaurs of prog rock had well and truly burst on the scene and The Sex Pistols a little known band that had supported them on one of their early gigs and trashed the Rods PA in the process, were now the arbiters of U.K. Punk style.

Timing is all and with that here's the Hot Rods still with the light in their eyes filmed in late 1975 at the Kensington Pub (one of the key venues at the time) with their totally brilliant harp player Lew Lewis - who sadly was ditched a few months later for just being too out of it for too much of the time.

Posted by Peter Richardson at 09:01