Into The Heart of Darkness 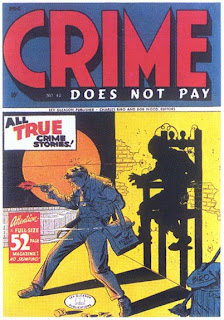 Well it is November, and as the days draw in there's nothing like a downbeat blog to get you all fired up for the day.

But in a way this is a continuation of yesterday's look at the life of Wallace Wood, whose battle with alcoholism ultimately ended with the poor guy blowing his brains out rather than struggling to eke out some kind of existence as a half blind cartoonist with chronic liver failure.

Despite the exacting requirements of comic strip creation, there is a surprisingly long roll call of very high profile cartoonists whose predeliction for the demon drink led to their ultimate downfall, but perhaps the most lurid of these would when compared to the likes of Graham Ingles, Reed Crandall, Bill Everett and Woody, all greats of U.S. comics "golden age" be amongst the least familiar of the names assembled.

Bob Wood was by all accounts a relatively modest talent when he entered the comic book industry in 1940 but by great good fortune he managed to hook up with another artist/ writer by name of Charles Biro and by sheer chutzpah and drive Biro with Wood assisting began to create a variety of superheroes for firstly MLJ comics and then shortly thereafter and with commendable business savvy Biro set up a deal with Lev Gleason publications by which he and Wood would take a share of the profits for the characters and titles they created.

So the team set to work with a vengeance, Biro writing, drawing and editing with Wood's assistance a string of successful titles such as "Daredevil" (the 1940's version was a boomerang wielding mute clad in a skintight costume, red one side, blue the other), "Silver Streak" and a host of spin off titles as each character spawned their own sidekick's mini series.

By all accounts the Biro/ Wood team were doing well, the volume of work was such that they were subcontracting writing and art chores to assistants who themselves would go on to even greater things. But it wasn't until a trip to the cinema by messrs Biro and Wood to see an MGM film with the lurid title of "Crime Does Not Pay" that the duo hit upon the idea that would transform their already well auspiced fortunes and push them into the big league of comic publication. 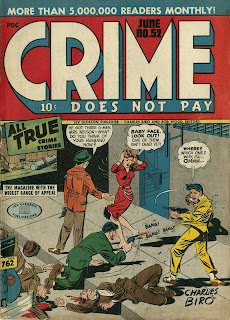 July 1942 saw the appearance on U.S. newstands of the first issue (numbered 23 for any comicbook anoraks out there as it continued the numbering from Silver Streak comics) of "Crime Does Not Pay". The premise was simple, ultra violent and lurid potted biographies of real life criminals whose lives would be inevitably terminated in a devastating hail of government endorsed hot lead, appealing to the voyeuristic needs of it's male teen target audience, while attempting to leaven the grotesque proceedings with at least a modest show of self righteous approbrium at the doings of Baby Face Nelson, Machine Gun Kelly, Ma Parker and John Dillinger. The issue was a sell out and sales continued to grow throughout the latter part of the 1940's when the appetite for superhero comics was on the wane.

By 1948 sales of "Crime Does Not Pay" had reached a heady one million copies a month and the comic's success had spawned an army of imitators of varying quality, each trying to outdo the other in terms of just how much blood soaked violence, they could push at their readership. 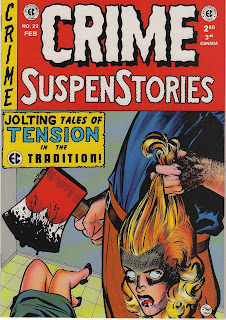 It couldn't last forever, by 1954 there was a Senate Subcommittee investigation into the supposedly pernicious effect that "crime" and "horror" comics were having on the nation's youth. A book by Dr. Frederick Wetham entitled, "Seduction of the Innocent" made the case with such an array of pseudo psychology and lurid examples of headless corpses and eyes about to be pierced by syringes that middle America was gripped by a state of near comics hysteria that threatened to overshadow the communist witch hunts being conducted by Senator Joseph McCarthy. As a result of the immediate backlash, distributors refused to carry comics that in any way seemed to fall into the category of deviant and corrupting. The resultant comics were so anodyne and lifeless that even if the distributors were happy to carry them again, no one could be bothered to read them and as a result comic creators fortunes dwindled. 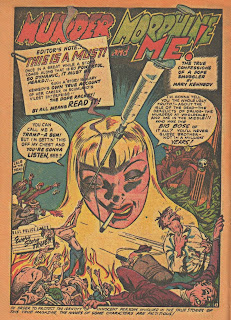 During the late summer of that year Wood in a state of near hysteria hopped a cab and told the bemused cabby, "I'm in terrible trouble. I'm going to get a couple of hours sleep and jump in the river". With the admirable insousciance which so typifies your average taxi driver, the cabby responded; "Oh yeah? What happened? Did you kill somebody?" To which Wood replied, "Yes, I killed a woman who was giving me a bad time in Room 91 at the Irving Hotel. Why don't you call somebody at the newspaper and make yourself a few dollars?"

After dropping Wood off at Greenwich Village's Regina Residence Hotel, the cabby went straight to the police who went straight to Wood's hotel and finding that a man matching Wood's description had registered under the name of Roger Turner proceeded to his room where they the found Wood stripped to his undies, his clothes being so soaked in blood that the police had to borrow a pair of trousers from the hotel manager before they took Wood away for questioning. 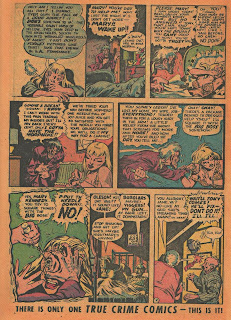 The police then made the journey to Room 91 at the Irving Hotel and found the bloodied and battered body of a woman lying amidst a sea of empty whisky bottles. It transpired in the subsequent trial that Wood after an eleven day drinking binge had bashed in the head of his unfortunate fiance with a steam iron.

Surprisingly in spite of the severity of the attack that Wood had enacted he only received a four to five year jail sentence for first degree manslaughter, the judge explaining his relative leniency thus, "It appears to me that you and the deceased were sick persons mentally because of your drinking and the probation report shows to me that this episode was an explosion of alchoholism and intoxication".

Wood served three years before being released into a less than reassuring world, unable to find work and unable to repay the heavies who had advanced him money whilst serving time in Sing Sing he was murdered and his remains unceremoniously deposited on the New Jersey Turnpike a deeply ironic end to one of the progenitors of one of the U.S.'s most lurid comic books.

Oh yes and while we're on the subject of dark places this is where Gina, Cary and Rabby now are:
Posted by Peter Richardson at 08:08