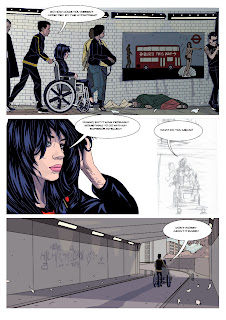 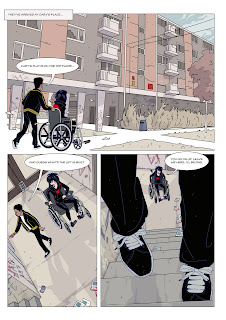 At the moment and in between juggling deadlines for four different clients, I am attempting to complete a page where Gina has just got off a train and met Cary who is wheeling her to Rabby's gaffe to rouse him from the hypnotic trance that too much time spent in one of the darker recesses of Cloud 109 has cast him. The idea is to give merest hint of the fact that she's used public transport in frame one, close up on her sardonic reply to Rabby's typically ingenuous enquiry in panel 2 and pull out again in panel 3 as we see them perambulating through dystopia, while in panel 4 we see them from a distance as they head towards the flats that become much more apparent in the first panel of the following page.

All relatively simple but to make it work does take a bit of juggling with reference whilst still keeping the overall narration of the thing as the ultimate pre-requisite. Storytelling is king.

Here's a fabulous example of location drawing from Ted Benoit's "Berceuse Electrique" the nearest you can come to Herge meets Raymond Chandler. 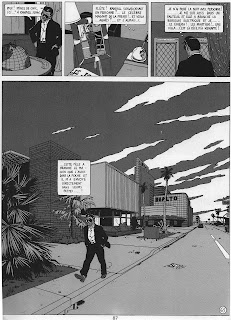 And at this point I hand over the rest of today's blog to David Orme, the genius writer behind so much of what befalls Gina, Cary and Rabby.

David the floor's all yours:

It’s about time I got my two pennyworth in, having left Peter to do all the running so far. A sudden contract to write some science books (and earn a few quid) has preoccupied Helen (the goodly wife) and myself for the past month, so my head has been full of rock formations, ocean currents, and weird weather. Talking of which, and talking of weird coincidences, which I wasn’t, I was just sitting down to write a double page spread on tornados when one went past the window. Don’t believe me? It’s all here:

Talking of believing things (which I think I was) brings us neatly to Cloud 109. Now I’ve never been a believer in the idea that fiction books are ‘about’ something - they are there to tell a story, not give a lecture – but if it is about anything, which it might be, it’s about what is real and what isn’t. Which ones are the real Cary, Rabby and Gina, and which the virtual ones? Cmon. It’s easy, none of them are real. Peter and I made it all up. But maybe some are more real than others . . .

And talking of rock formations, amongst other things, Peter has persuaded me to sign up for Facebook which is . . . interesting. Well, sometimes. Most of the time it’s not. Do I really need to know that a ‘friend’ is stuck on a train, or that another has got a bit of a sniffle? Only time will tell. Of course, I could have posted a message saying ‘Guess what! A tornado has just gone past my window!’ but no one would believe me. There we are. Talking of believing things again. Actually, I believe that once people sign up for Facebook they actually cease to be living, breathing human beings, and only exist in the imaginations of their ‘friends’. That’s why they have to keep reminding everyone they are there by telling them they’re on a train. They’re not really. They are just a collection of quantum particles swirling around in my hippocampus desperately seeking a real existence. Sounds a good plot, eh Peter? Let’s work on it.