I'm really aware these days that some of the most exciting comics being created at the moment are done on a wing and a prayer. As the world of high street publishing retrenches and is increasingly obliged to pander to what is safest in terms of guaranteed sales, so more and more people are doing their own thing in terms of self publishing and self promoting. There's a lot going on at the moment and it's just a few mouse clicks away, but the actuality is that everyone needs a day job and if all this creativity is largely unfunded then we really are talking labours of love.

I remember a conversation I once had with Denis McLoughlin, it was towards the end of his career and by this stage he was working for D.C. Thomson's Commando comics. Despite the fact that Thomson's were paying him a pittance, he was still expending an insane amoun 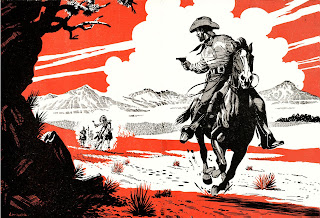 t of time creating really atmospheric and densely textured pages and even as an octogenerian was working equally insane hours to met his deadlines. I asked him why he did it and with admirable candour he replied that even if they paid him nothing he'd still do it.

And that really is the nub of it, all artistic endeavours are largely irrational, if you had any sense you'd go and pursue a career in banking, accountancy, law well almost any kind of dayjob, but it wouldn't give you the buzz of realizing your own ideas via writing, painting, music whatever and the fact that there's absolutely no guarantees that you'll ever make a living at it is in a perverse way added stimulus. 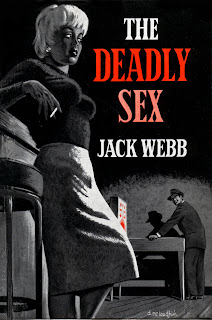 lie just beyond and outside the portals of Waterstones. The fact that the people originating these comics are doing it unfunded and often on the back of a demanding day job speaks volumes for the sort of commitment they are bringing to their work.

I mentioned Denis McLoughlin also as an opportunity to run some of this largely unsung hero's stuff before your eyes, particularly as one of the bloggers who I regularly follow James Corcoran, who somewhat self deprecatingly describes himself as an amateur doodler and storyteller from Scotland is producing a tasty strip on his blog in black and white with one colour tipped in which immediately gives it a nicely retro feeling and made me think o 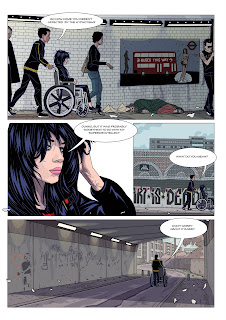 So here's a page of Denis's work and one of his incredible "Noir" fiction covers from the '50's and lastly and hopefully not to anti-climatically here's the completed page (46) from Cloud 109.
Posted by Peter Richardson at 09:00