How To Make A Living Out Of Illustration (?) 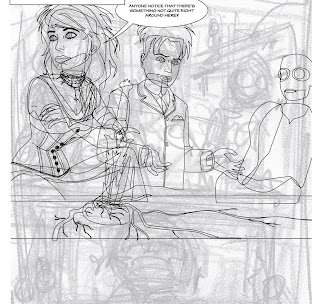 I've toyed with the idea of putting a posting up on this subject for some while and I thought in the end "Oh Gwannnn - Why not???" It is painful though and I'm probably going to have to break off typing from time to time to dry away the tears.

The catalyst for my making this posting today was reading last night about the fees that Roy Cross earned in the mid 1970's when he was producing his superb aeronautical paintings for the U.K's leading plastic kit manufacturer Airfix. The last two paintings he sold them commanded an overall fee of £595.00. Now whereas that isn't a huge amount of money in today's terms in mid seventies terms that was pretty good going. There you had a master craftsman who was being generously rewarded for his labours.

Nowadays there are an awful lot of illustrators producing works of similar demand and complexity for exactly the same fee and sometimes less, much less than that. The Association of Illustrators recently ran a survey on illustrators earnings and the majority of them (some 80%) were earning less than 20K per annum.

There are a few illustrators that I know who do through being as much businessmen as artists manage to earn a relatively good crust from their labours and a few a very few do occassionally head towards the six figure mark. But to do that you have to not only tailor your style to the market (difficult at the best of times), but you also have to be driven to the point of obsessiveness with regard to working every hour that God sends you all the while praying that you can repeat the same trick for another year to met the huge mortgage you now find yourself saddled with. I've been there and done it and I can say that while you might get a certain short term buzz from being Mr Breadwinner Par Excellence, the truth is that it is a horribly uncertain way to make a living and you do know that eventually the fickle market will be looking elsewhere
while you stress about the shortage of work you now face.

The reality is that illustration fees are at an all time low, I can say this with confidence as I am not just drawing on my own experience but those of a lot of other colleagues. Essentially it's a buyer's market out there and even illustrators agents (I will take my courage in both hands and do a posting on that vexatious subject sometime soon) are putting in low quotes in a desperate bid to keep some of their now insanely huge stables of artists semi occupied.

So to any students of illustration reading this, try to acheive a paired down life style, keep your overheads as low as possible, work for cash in hand clients as often as you can and just have fun developing your own ideas, so hopefully you can acheive creative fulfillment without having to ever pay of that friggin loan that a bunch of politicians who never got off milking the pu 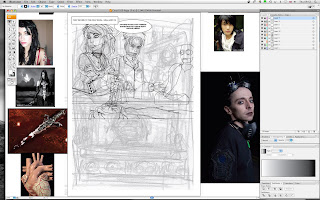 blic purse since they went off to university on full grants have stiffed you with.

And talking about illustration students here's a film that Sheryl (Gina) recently appeared in - pretty weird and dark stuff...

And talking about dark stuff the above bits are page 19 of Cloud 109 in progress...
Posted by Peter Richardson at 10:01