One of the considerations I had to make when first deciding how to do justice to the script that David had produced for Cloud 109 was double underlining the identities of each of our principle three characters, so that no matter how often they changed their image or game gear as they go from one form of 'reality' to another it would be immediately apparent who was who.

The solution I eventually lit upon was simple and blindingly obvious, in addition to the gear that they wear acting as a projection for their personalities, Cary's a bit nerdy and it certainly shows in his choice of apparel, whereas Rabby's more your all round action type of guy and Gina's got this Goth chic thing going which perfectly matches her cool knowingness, I also included colour coding as the final and definitive key to who's who in any given shot. 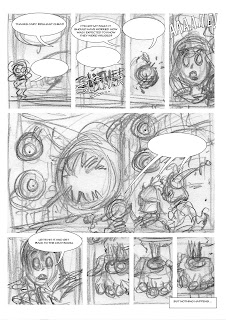 ason is that as the style of drawing throughout is linear, using solid black for areas of hair and clothing avoids the business of drawing in black areas of shadow without sacrificing the necessary punch I was seeking to achieve. Tonal dynamics being thus resolved, it was therefore very easy to drop in just one other colour for each of the characters. Gina is red, Cary is green and Rabby is yellow. This colour coding approach opens up a lot of creative possibilities and just adds to the creative fun of the process.

However and with some degree of irony 'Cloud 109's first printed outing is going to be as a black and white teaser comprising the first quarter of Book 1 in Jordan Shiveley's excellent and highly recommended Hive anthology the current issue Hive 3 is out on sale as I type and we are scheduled for the following issue. I've checked over the pages and even in black and white for this sequence David's rich characterizations of Gina, Cary and Rabby work well enough to overcome the loss of the colour coding idea. 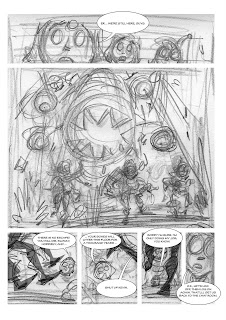 Meanwhile and just to prove to you guys that we're still beavouring away feverishly on 'Cloud 109' here's a couple more pages in their rough incarnations and as you can see they are still in deep dos.
Posted by Peter Richardson at 08:40