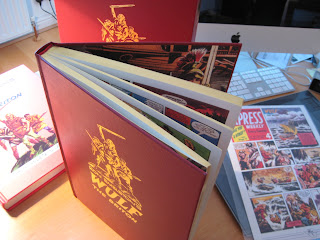 I was up in town yesterday for lunch with Geoff West, chief Svengali and head honcho of Book Palace Books (hence the absence of a posting yesterday). It was a moment that we'd anticipated almost a year ago.

It was the moment when the project that we were working on would finally see fruition. 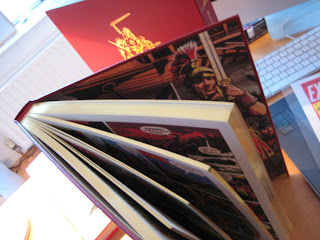 In the intervening time the project that I naively thought would not be THAT time consuming had swallowed up months and months of work, from tracking down people who knew both the artist and his work on Wulf, from ferreting out the few surviving original art boards and from the scanning and digital reconstruction required to make the original Express Weekly pages sing with a life and vivacity that has eluded so many similar projects. 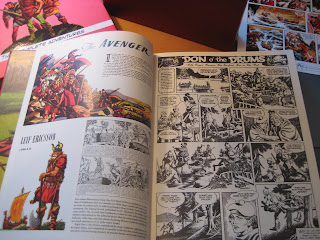 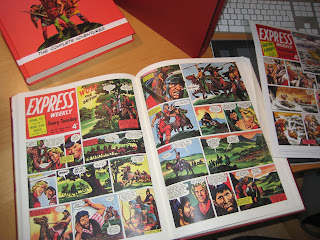 And that's even before we get to writing and designing the book!

Needless to say, I was in a state of some trepidation as Geoff handed me the first two books from his bag of imminent Book Palace Books arrivals. These being the second part of The Complete Fleetway Index and Don Lawrence's Wells Fargo. Both these books are, I am pleased to say, really first rate and in the case of The Fleetway Index, is even better than it's predecessor, with full color throughout and many magnificent examples of original art for Thriller Comics Library and Cowboy Picture Library. 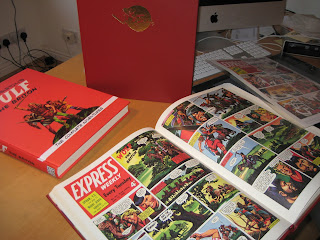 But try as I did to forestall the inevitable, the moment was finally on hand when I would have to look at the book that has occupied so much of my time for so much of last year. As I gingerly took the hefty looking leather clad tome complete with slipcase onto my lap, all the nightmares that had assailed me in the intervening months when the last lot of corrected pdfs had gone winging their way to Prolong, our superb Chinese printer, ran through my mind:

Will that double page spread marry up correctly? 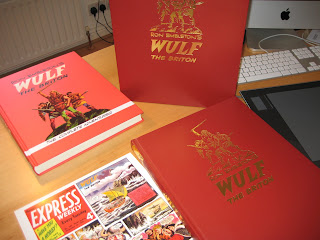 Will some areas of digital surgery be in any way evident?

Will the endpapers be there? (irrational I know but...)

Will there be any glaring typos that we missed, pages out of sequence or other disasters unimaginable until you are faced with them? 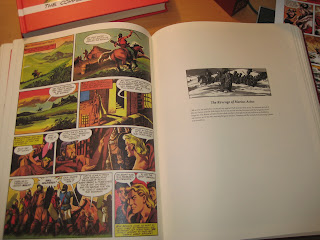 Will the pages look as good as the original comics? This last one a real cause for concern as the scanning and restoration process can throw up as many problems as it solves and there is a lot of so-so material out in print already that bears mute testimony to this conundrum.

I opened the book tentatively... 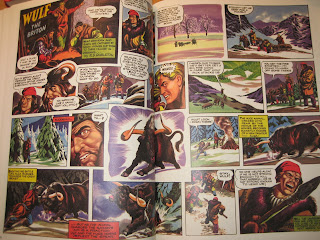 Yup this book is every bit as good as I could have hoped for. The leather slipcased edition is a magnificent beast, with gold edged pages and the most amazing looking cover and slipcase complete with sword, Wulf icons and title in gold block. The regular edition is also a truly handsome book with laminate relief on the Wulf icons on front, back and spine. The paper is just exquisite, archival matte (similar to Fantagraphics new Prince Valiant series), it has a slight off-white bias (whiter than it appears in these photos where there is the warm glow from an angle-poise lamp) and is just perfect for creating the right feel to these amazing stories, giving the reader a very similar experience to the one they would have experienced reading Wulf when it was first published. 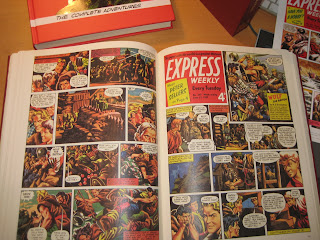 Where the two editions differ in terms of content is that the slipcased edition also includes an additional 24 pages showcasing some truly amazing examples of Ron Embleton's original artwork for this series. Some of these pages took some real serious tracking down and were still being sourced while the first set of proofs were being sent back to us from the printers.

The quality of the scans and the repro on this paper is the best I have seen to date. Not only have the pages been able to retain the subtlety and nuances of the original printing, but in many cases a lot of Embleton's phenomenal brush work is more appreciable in the book than it is in the comics from which it was sourced.

The whole book just oozes quality and I am not only very relieved but also very happy that we are putting the best work we could create into the hands of readers who have been prepared to make a significant financial commitment to accessing. 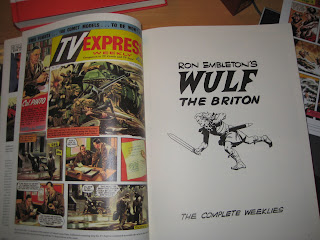 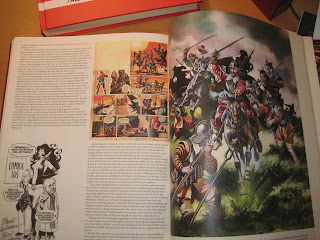 Which brings me to a question that I am occasionally asked regarding possible future and less expensive editions of this book. The fact is that it all goes back to the kind of number crunching decisions that have to be made when publishing books for a specialist market. The bottom line with a project such as this is that there are only so many people who will want to buy a book devoted to a comic strip that nobody outside of a select coterie of comic aficionados has ever heard of. Publishing costs per unit go down when you do large print runs. So in the case of Wulf you could commit to a sufficiently large print run so that everyone that wants a copy can have one for less than thirty quid. But even with a larger print run you will need to make some economies in terms of production, so the book has to shrink both in terms of page dimension and page run. So perhaps smaller format in three volumes? 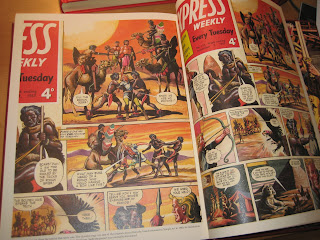 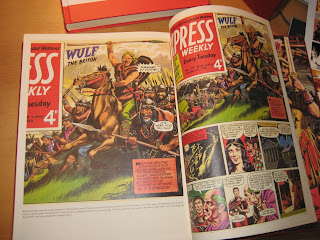 And guess what??? Because even less people are aware of Wulf than they are Dan Dare you will never sell the bulk of your print run - sure you'll sell a few more copies but you will be tripping over those piles of unsold books for years to come. And in the meantime you'll have taken a big hit in terms of your publishing costs. Costs that you will never clear.

So the logic of going in the opposite direction and putting as much love, care and thought into producing a book that readers will treasure becomes pretty unbeatable. OK so the price tag is high but even the leather edition is still a lot less expensive then trying to hoover up back copies of Express Weekly at anything up to £10.00 a throw multiplied by the  200+ you will need to complete the run and the time it will take. 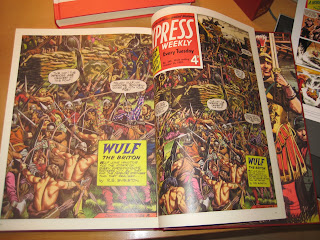 So there are no plans to do any additional less expensive editions of Wulf, it just isn't financially feasible. It's far more exciting just to concentrate on future projects and for those lucky owners of this book which will be arriving in bulk on these shores shortly (see Steve Holland's update) they will have the nice warm feeling that they have a book of beauty and something that they can rightly regard as a real investment.

It really is that good! 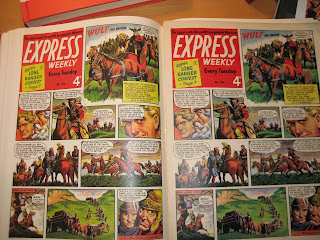 I've included photos of the new arrivals and a couple of pix where you can see the original comics side by side with the newly printed versions. Thus you can at least gain a rough idea of the overall fidelity of the color balance. What you can't see is the fabulous detail of Embleton's exquisite brush work.

Nor can you smell the fantastic aroma of that archival matte paper. 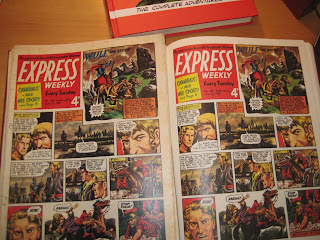 Further details of how to obtain a copy of this book is at the Book Palace Website. It seems that there are now just a few remaining copies of the Leather Lettered edition which is the edition that comes with the giant sized print and all three editions are selling very well, which is indeed promising. The pre-publication discounts hold good until March 31st and every order received by then will receive an additional print of Wulf and the Vikings again sourced from original artwork provided by Paul Stephenson of PS Publishing, whose recent book by Alastair Crompton "Tomorrow Revisited" is the most authoritative and engrossing book ever on the subject of Frank Hampson and Dan Dare.
Posted by Peter Richardson at 17:00