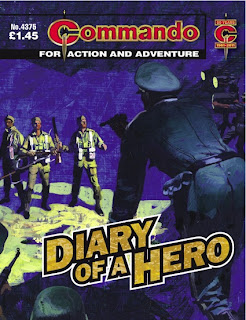 More from the HQ of Commando, the UK's last and longest running pocket war library now appearing on a fortnightly basis and in it's 50th year of publication. 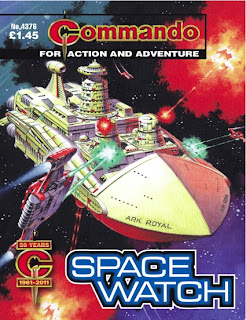 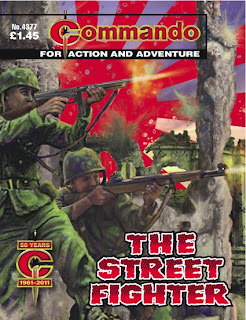 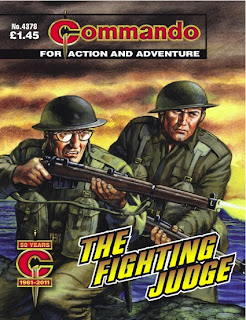 Dairy Of A Hero


This story had been one of my favourites as a young reader, read and re-read many times. Then in 1981 — when I joined the staff of Commando for the first time — it was one of the stories I had to check over for re-issue. And re-read again. Now I’ve given myself the chance to read it through once more.
It remains a cracking tale, full of Commando heroes, and with a belting sting in the tail. It’s wonderfully constructed and, with artwork by Cam Kennedy and Penalva, looks absolutely right into the bargain.
I like it as much now as I did in1967.


Ricardo Garijo worked for Starblazer before Commando, and he brought all his sci-fi skills to this 1994 plot where Commando strayed off its usual course, taking to space…and beyond…with its linked G-Tex stories, the brainchild of writer Mike Knowles. The futuristic script (this time by Ian Clark) set the tone for Ricardo to work his magic, while Ian Kennedy took a break from Spitfires and the like to tackle spacecraft.
What’s it about? Saving whales and the world for a start. Quite an undertaking and great to read.

DIARY OF A HERO

This story is taken from the pages of the diary of a true hero. It tells of seven men’s fight to survive behind enemy lines with a traitor in their midst. It brings courage to life, tells of bravery of the highest order.

A battle in outer space tests G-Tex Wolf Brady to the limit – especially when a ruthless computer hacker makes his latest challenge even more dangerous!

Not every confrontation between United States Marines and the Imperial Japanese Army took place in the steamy jungles of the South Pacific. The battle for Manila in the Philippines was a house-to-house struggle, pure and simple.
This didn’t bother Marine Eddie Novak. In the war’s early fighting he’d lost buddies and now he was out for revenge, no matter when — or where — he got the chance.

As a High Court judge, Mr Justice Jardine had a fierce reputation as a hard man. Hard but fair. His judgements were respected even by those on the receiving end of a verdict.
When he joined the Army’s legal branch he remained the same hard but fair man. His working environment changed, though. Gone were the wood-panelled courtrooms, replaced by tents or makeshift offices.
And another thing changed too. He picked up a rifle…to deadly effect.