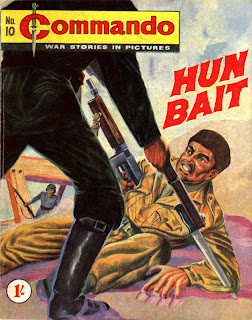 More Commandos are on sale now and if you are a non UK resident you can take the waiting out of wanting via Commando's digital subscription facility via their website.

So here are the covers and accompanying blurb plus the third of their reprints of the first dozen Commandos to debut fifty years ago. 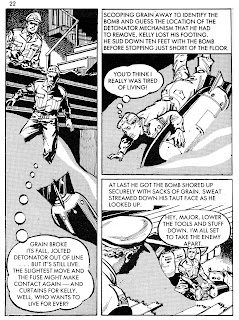 Great Ken Barr cover and lovely artwork by Gordon Livingstone. Pictures here are from the original publication
located in the depths of ye editors cavernous vault. 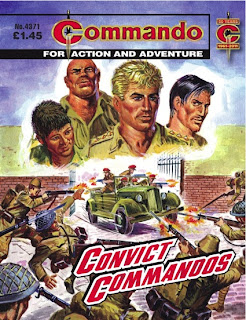 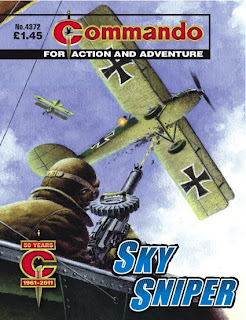 There you are — stuck in a military prison in Singapore when the Japanese smash into town. You know that if being a prisoner of the British is bad being a prisoner of the Japanese will be ten times worse.
So if a man in British officer’s uniform was to offer to get you out if you’d work for him, you’d agree to do anything he ordered, wouldn’t you?
The Convict Commandos did…and probably wished they hadn’t!

Soaring above the battlefields of the Western Front, the pilots of the Royal Flying Corps saw themselves as guardians of chivalry — gentlemen fliers.
So Lieutenant James Wilford, the pilot of a Farman MF11 Shorthorn, got a shock when he met his new observer, Captain Alan Kingston. This gun-toting, hardened veteran had already seen action in the trenches — and had no time for old-fashioned chivalry. If the Huns wanted a fight…they’d get one!

They were keeping him away from the front line — a man like Sergeant Kelly! And yet this big Australian had such a deadly hatred for the enemy it made him into a fighting fury, a battling, raging, soldier supreme.
But John Kelly was a trier, and exciting was the path he trod to defy authority and get his hands on the enemy’s throat.

Hun Bait, originally Commando No 10. Previously re-issued as No 2595. Now released in as near to the original presentation as possible.

THE EYE OF RA

It was carved on the wall of an ancient tomb. The Eye of Ra, sun-god of Egypt. The legend said that if it gazed on anyone defiling the tomb, that person was doomed. The men who discovered it laughed at the idea, but one of them died violently and the others vanished without trace!
The war brought soldiers to Egypt, and among them was the brother of the dead man. From the moment his troop-train was ambushed until the moment he finally stood in that same tomb, Alan Fisher was to run into more dangers than he had ever thought possible. 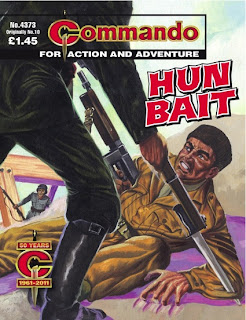 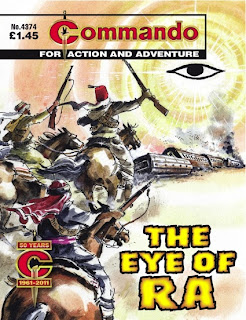 Posted by Peter Richardson at 22:25