Just had these remarkable scans from David Slinn, who as you may recall was working in the UK comics industry during much of it's post war renaissance. 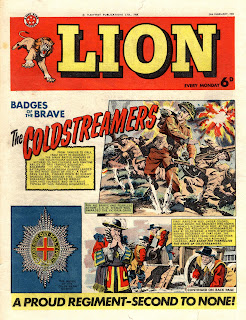 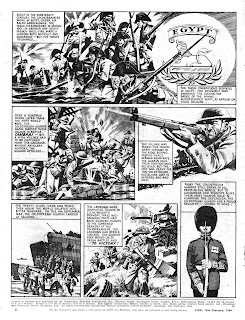 These two pages by the legendary Ron Embleton are quite surprising as by 1964, he had long ceased to do work for what were regarded as cheap and cheerful comics which Fleetway's  Lion epitomized. However here he is, the doyen of full color rotogravure printing, apparently slumming it creating a two page strip where the crude color separations are done in house. A huge departure from the sort of color comic strips followers of Wrath of the Gods, Stingray or Wulf the Briton were used to.

I can only presume it was one of those last minute phone calls from his agent Pat (or could have been father Don) along the lines of, " so and so is unable to do this two page strip - could you possibly fit this one in Ron?"

Whatever - it's yet another example of this great artist's sheer professionalism and versatility.