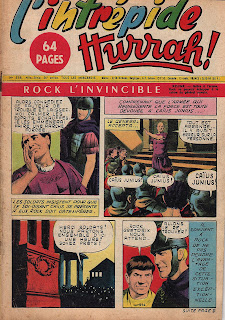 Imagine then a young and enterprising man with a love of comics and a zest for life, arriving from Italy in 1923 and setting up a printing press in Paris. Cino Del Duca was a man of extraordinary drive and vision and he quickly set about creating his own publishing empire in France. When the war interrupted his business with typical gusto he joined the French Resistance and  screwed up things sufficiently effectively for the occupiers that he was awarded the Croix De Guerre. 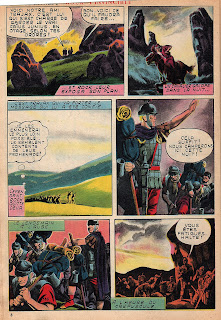 When the war ended he really set to and built up his own comics revolution, encouraging home grown talent and buying in other strips that took his eye from Europe and the US. The comics L'Intrepide and Hurrah! eventually merged and amongst the many strips that they bought in from the UK was none other than Wulf The Briton. Rechristened Rock L'Invincible it has to said that the reproduction was completely compromised by being crudely separated so that the original pages were produced as a black plate onto which were added cyan, magenta and yellow. The pages were similarly re-jigged and additional art was added by Angelo Di Marco.

A long way short of the original Bemrose printing but nevertheless interesting for Embleton aficionados and topical for as I type the huge container vessel the OOCL Hamburg is sailing ever closer to these shores with the long awaited Fleetway Index Volume 2, Don Lawrence's Wells Fargo and ... Ron Embleton's Wulf The Briton The Complete Adventures. 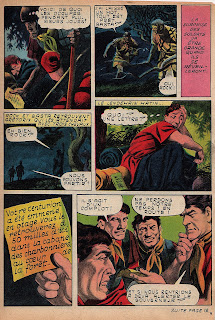 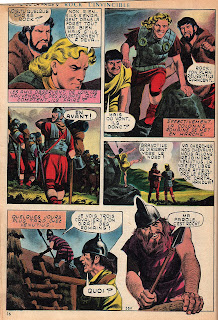 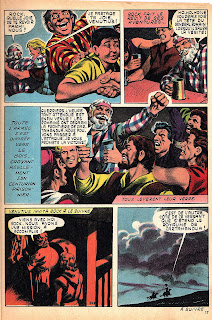 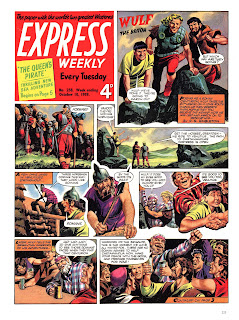 My days of being one of only two people to have a copy of this book are happily numbered.
Posted by Peter Richardson at 21:49