All In A Weekend's Work 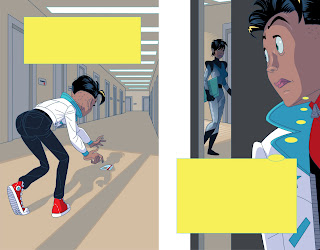 I remember many years ago when I was working with a couple of young writers who were trying to break loose of the traditionally constrictive format of the educational books they were being commissioned to produce. We were having a meeting about a book they wanted to format as a graphic novel and as my next port of call was to be the offices of Sonic the Comic, we were looking at some of the pages I was about to deliver for the next installment of "Streets of Rage".

"That's what we want!", they excitedly exclaimed gesturing in the direction of a page filled with over the top non PC destruction of hoods and urban low-life orchestrated to a script by Mark Millar. 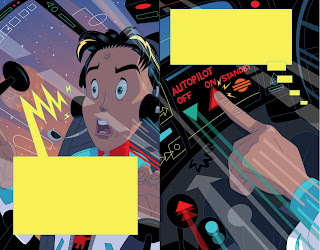 "Hmmmmmm..." I thought, "we'll be lucky if we can get a percentile of this kind of excess past the powers that ordain the destinies of creatives working in educational publishing."

Working in comics for artists, may at times be poorly rewarded in terms of earnings, but in terms of freedom to come up with your own ideas and characterizations in response to the writer's script it is an amazingly indulgent medium.

This has been brought home to me on many occasions, the most recent of which was today when  I had a call from my lovely art editor to bring me the bad news that my interpretation of the brief that I'd been working on over the weekend was deemed by the book's editor a little too cartoony and a little too OTT for the slow reading 16 year olds to which this book was aimed.

"We want the characters much more realistic and can he get rid of the buzz cut effect?"

So 16 pages of roughs need to be reworked and ... sniffle ... these drawings are now redundant and surplus to requirements.

Wish I knew.
Posted by Peter Richardson at 17:13