Lady Penelope and That Mysterious Ron Embleton Portrait in Oils 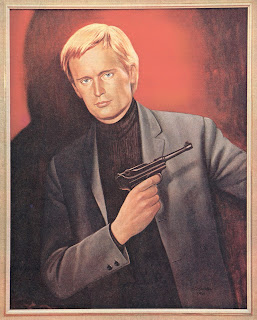 This blog seems to have a life all it's own. It's a living, breathing creation powered by the people who so graciously leave comments and send me scans of rare material germane to the topics discussed and analyzed on its pages.

With yours truly as the old blogmeister, fussing around the guests with a tray of cybernetic tea and cakes to help sustain the proceedings, secure in the knowledge that the event has a life all it's own and all I need to do is refill the odd tea cup and generally make sure everybody has has everything they need to sustain the discourse. 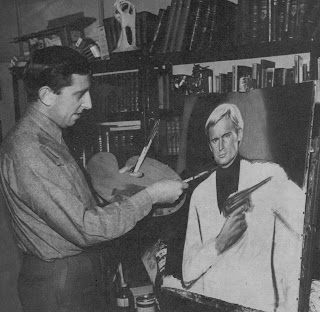 Take Phil Rushton's recent remark hinting at a reader's contest where a Ron Embleton original oil painting was offered as a prize. Phil couldn't remember the details and neither could I for that matter, but David Slinn, who was actually working as an artist in the comics industry at the time and is one of the contributors to the Wulf the Briton book came through with more information and some scans. 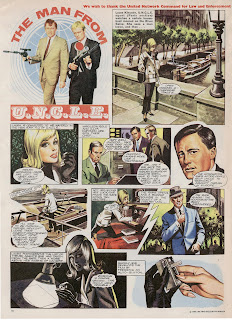 So here's the painting and it's none other than UK thespy David McCullum as heart throb Illya Kuryakin, from the Man From Uncle. And here's a photo of Ron Embleton painting the picture where you can see how he is building up the form. Notice also that Ron has given Illya a Luger rather than the ridiculous hand gun come cocktail dispenser that some TV exec thought was the cutting edge of cool in 1966.

The competition would have (I guess) ran in TV21's sister comic Lady Penelope, which is where the Man from Uncle strip appeared. Lovely artwork again by Ron Embleton although the action on the girl administering the karate chop to the baddie is a bit preposterous - but then so was The Man From Uncle.

And while we're on the subject of Lady Penelope check this out: 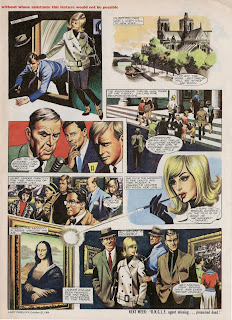