Gerry Embleton, The S.A.S. and the Weirdest Sign Off in Comicsdom. 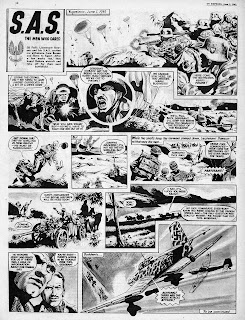 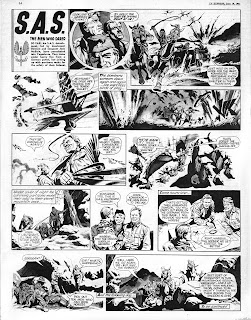 OK here as promised is a sample of Gerry Embleton's work from what was the very last story to appear in TV Express's S.A.S. strip. Embleton's predecessor on the strip had been another doyen of rugged and gritty action strips - the redoubtable Graham Coton.

Embleton's previous story on the series had been set in the far east as the S.A.S. chaps waged war on the forces of Hirohito. His artwork as with elder brother Ron, was stunning, full of punch, aided and abetted by well researched historical accuracy to make the action that much more credible.

But this very last story although it starts plausibly enough is completely and utterly sabotaged in the very last episode. How this thing got past the TV Express editorial staff beats me. Mr Slinn (sage and sometime witness to the goings on at Racquet Court) if you're reading, this your opinion on what might have occurred would be most gratefully received. 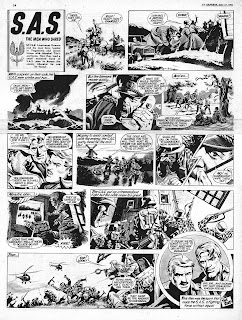 After all the schoolboy audience who this stuff was aimed at would have twigged the OTT farcical touches immediately.

All images © Express Newspapers 2011
Posted by Peter Richardson at 20:55