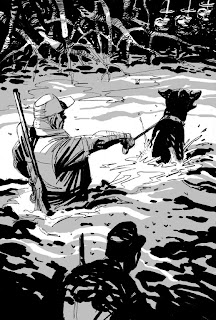 I'm going to stick my neck out a bit today and say a silent prayer that certain interested parties are not visiting this little blog of mine. I'm sure they're not as they're probably already in one of those things called "a meeting". However yesterday's running of the artwork of the guy leaping from the rooftop did bring to mind a somewhat painful experience that befell me whilst creating some of the artworks that helped land me the job with the New York Ad Agency in the first place.

I remember many years ago an illustrator of some experience and note giving a talk to a bunch of students about the travailles of working for advertising agencies, it was something along the lines of "the money is great but they're so picky and the work is always a stress". Not word for word but that was the essential import of her message. Her preferred outlet was the world of publishing, where she could enjoy the relative creative freedom that such clients offered her.

In contrast I've always found the world of advertising to be simple and straightforward, you work from an art director's rough and they tell you exactly what they want. In essence they're paying for your style and your professionalism i.e. they know you will deliver the goods and meet all those important delivery times. Couldn't be simpler and the pay is usually pretty good too.

Which brings me to the painful experience which concerned a couple of books I illustrated some years ago for a publisher's educational division. I should point out here that educational publishing is one of the most demanding and committee driven areas of illustration conc 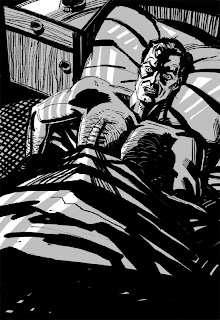 eivable, it is for many illustrators a lifeline but it can also be the graveyard of any creative ambitions they once might have nurtured. Case in point being the two books I illustrated for said (and for obvious reasons un-named) publisher. Ostensibly it was a nice job with the hint of more to follow. Black and white illustrations for adaptations of two James Bond stories; "Dr No" and "Goldfinger". The manuscripts eventually arrived along with mounds of layouts, editors directions on what should appear in each artwork, references and delivery dates for roughs and final artwork. There were various stipulations one of which did concern me as it asked wherever possible to avoid using large areas of black.

This was destined to be the source of much grief later on. So I did all the roughs and shot them over in batches to the team, I also queried the not too much black as for me, some of the scenes by defintion were going to be pretty dark and the style I was adopting was very much in that gritty, graphic mode where solid blacks just add to the appeal of the whole thing. So I worked up a couple of the finished artworks and sent those over so they would at least be able to see where the thing was going.

And then I waited ... and waited ... and waited ... for comments to come back whilst nothing happened and the final immovable delivery date loomed ever closer . Eventually I did get comments back, loads and loads of them some involving major changes of viewpoint, others more straightforward but a lot of comments by diverse hands to be filtered through. Anyway juggling around with the usual other jobs I just piled into the artworks as quickly as possible and started batting them back to the art editor, who seemed to ge 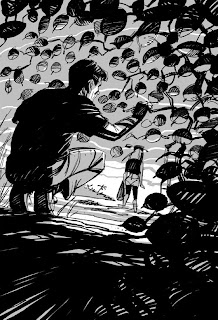 nuinely like what I was doing. However after a point a lot of the now "finished" artworks came back from the editor for further amendations and again changes of viewpoint in addition to those already requested. As time was now rapidly running out I will admit I dug my heels in and started to question the rationale behind some of the latest changes. The final trump was when late in the day the editor (as opposed to art editor) then requested that I leech out all the solid blacks from my drawings. Upon my enquiring why I was then informed that it was because the paper they were printing the books on was so thin it would create legiblity problems for the readers when viewing the reverse sides of the pages my artworks were to appear on.

The upshot of all this was that I was blacklisted by said publisher.

Advertising work in contrast is a breeze.
Posted by Peter Richardson at 09:02