Commando For The iPad Generation 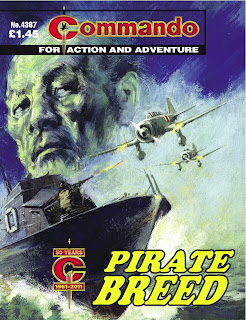 This week Commando comic steals a march on the rest of DC Thomson's stable of comics and hits the iPad with subscriptions now being offered for a down-loadable version of the comic which is currently celebrating it's 50th year of publication. One of a raft of innovations that editor Calum Laird and his team at Commando HQ have introduced to add a rejuvenating shot in the arm to this popular UK comic.

For more information check out the excellent Commando website.

Here are the covers to the latest batch of these comics and as you can see the reprint policy of revisiting some of the earliest titles from this series is continuing along with new offerings from the talented stable of artists and writer who are still busily creating new adventures for their readers. 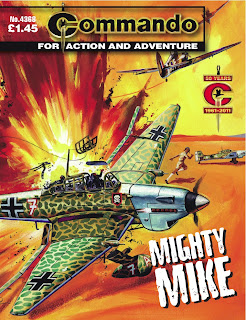 Here's the official gen from those frightfully helpful wallahs at Commando HQ:

Commando, the iconic action and adventure comic published by D.C. Thomson & Co. Ltd., starts its 50th anniversary year in 2011 with a bang, courtesy of a brand new website.,  officially launched today. The much-loved comic, which has now surpassed 4300 stories since its inception in July 1961, has launched a full-scale assault on the digital world, including a new website, digital subscriptions service using iPhone & iPad apps, a first from DC Thomson’s stable of publications. The new service ensures that Commando adventures, famed for their accuracy and authenticity, are now available in digital form as well as print. 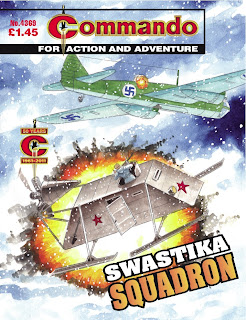 The new website, created by DC Thomson’s Digital team in partnership with Edinburgh-based digital agency, Storm ID, has a range of new features which ensures that Commando is well positioned for the digital future.  Users can explore the stories, including new issues, using the free interactive viewer as well as obtain information on the military hardware featured throughout. There’s also the chance to enjoy various story features and the reminiscences of both the current editorial team and contributors from throughout Commando’s 50 years. Visitors will also have the ability to purchase a digital subscription directly from the website or buy a print subscription for delivery. Also, for the first time, users can get their hands on some famous Commando cover posters (in A1 size format) exclusively through Commandocomics.com, for the introductory price of £19.99. 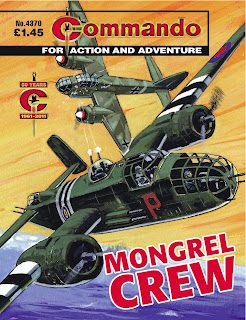 Commando Editor, Calum Laird, said: “Being the first DC Thomson title to offer a downloadable digital comic via a web-based subscription service is quite a responsibility but one we are delighted to take on. Commando is a unique product in the UK marketplace and now, it can be made available worldwide at the click of a mouse, or the tap of a screen for iPhone and iPad. These devices are almost tailor-made for the unique presentation of Commando. Backing up the subscription service with a fully-loaded website giving access to our timeless story archive will be welcomed with open arms by Commando fans.”

The iPad and iPhone apps are free to download through the Apple iTunes App Store and a digital subscription is priced at £4.99 per month, compared to a £99 annual print subscription. For those not sure there are 4 free issues to download prior to making a purchase so you can be sure! The new website, digital subscriptions and iPhone/iPad apps will be backed by digital marketing campaign, featuring paid-search, Facebook and online display advertising. 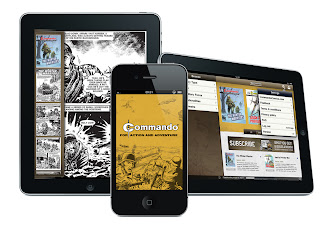 There’s much more to come from Britain’s only war/action adventure comic in its Golden Jubilee year with a full programme planned. Favourite characters are due to make returns alongside new heroes specially created for the anniversary year along with delving deep into Commando's past to dust off classic stories like “Walk or Die” that haven't seen the light of day for many years.  Commando is one war veteran that isn’t done fighting yet. 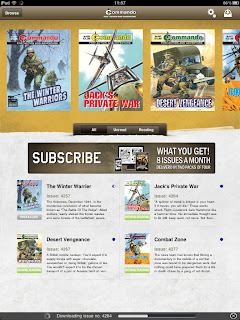 And here's a short briefing from Commando HQ concerning the contents of these lovely looking comics, which includes an early appearance by a youthful Cam Kennedy cutting his teeth on the art chores of one of these classic tales.

“Hey, Bluey!”
— The length and breadth of the China Seas that’s all he was called — Bluey. Gold-smuggling, gun-running, he was a tough guy who took all kinds of chances in his fast old converted MTB to make a quick dollar.
When the Australian Navy had a tough job to do and needed a guy who knew the China Seas backwards, had smuggling contacts on nearly every island, could handle a gun and take a chance in a thousand — did they look among their own officers? Did they blazes!
“Hey, Bluey!”

Mighty Mike Mansell, top fighter ace, was the guy chosen as test pilot for the fastest aircraft produced for the RAF. The plane was so top secret that it didn’t even have a name as Mike put it through its paces over the remote north of Scotland.
Yet, despite all the security, the Nazis believed they could get their hands on the plane…and no wonder they were confident. Flying for the Luftwaffe was Mike’s identical twin brother…

A bunch of RAF men fighting in planes with swastikas? Traitors, surely, flying German kites?
Well, no. they were a group of Blenheim crews for whom a ferry flight turned into a fight for survival in planes carrying the sign of the crooked cross.

They were a mongrel crew all right. Half-a-dozen men lumped together in a Mitchell bomber for the wrong reason — a propaganda stunt. Though each had a score to settle with the enemy, they were not really expected to fight.
But, when push came to shove, the mongrels would show they had a bite to match any pedigree hound.


The big story to go with these issues is not the cracking art and tales from some legends of Commando’s past, but the official release of our apps and digital subscription which will secure the Commando’s future. Check out the accompanying release for details and images.