Following on from yesterday's posting of Embleton's "Wulf the Briton" epic, it's worth taking a look at one of the most dynamic series of paintings he 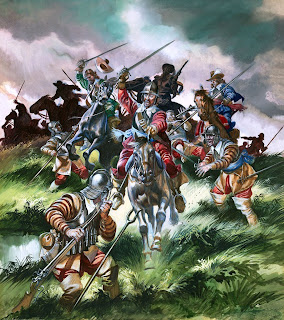 was commissioned to create.

Look and Learn was as was briefly touched upon last week, the brainchild of visionary editor Leonard Matthews. Matthews knew what he wanted in terms of quality artwork and scripts and with the best part of twenty years editing experience behind him knew how to source the material for the new weekly which would combine comics and text with truly dynamic artwork to engage with all but the most reluctant of readers. 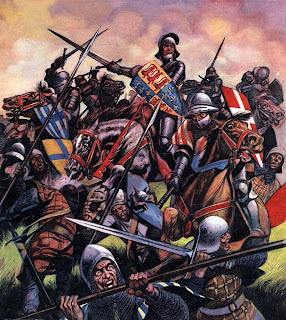 At the time that Ron Embleton was approached by Matthews, he was coming to the end of an epic centre spread comic strip entitled "Wrath of the God's" and although the artwork he produced for Michael Moorcock's script was truly astounding he was nevertheless chary about committing to a sequel. The work that Look and Learn afforded him meant that he could safely relinquish any further input on "Wrath of the Gods' and hand over the artwork duties to John M. Burns. 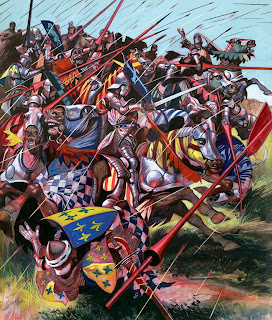 Embleton then proceeded to produce some of his finest work for Matthews, ranging from black and white spot illustrations and vignettes to single and double page comic strips all with a primarily historical content but it was perhaps a series on the English Civil War and the subsequent series of "Into Battle" both undertaken in late 1962 early 1963 that saw his best work for this Working in a really loose manner he drew straight onto the art boards with pencil and then in some cases red and blue biros, before applying washes of ink and then working up areas of sharper detail and contrast with light body paint. Some of the methods he used are most apparent when you look at his monochrome work. The passing years have discoloured the original boards to a light bisque hue and it's very easy to observe where he has added lighter areas of gouache which appear as a steely grey. 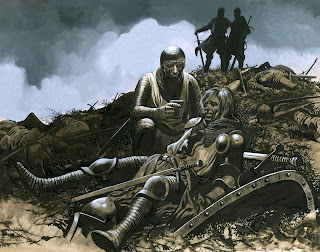 These paintings are to my mind the finest works that this great artist created and in terms of atmosphere, historical conviction and sheer in your face dynamism they have never been bettered.

More of Embleton's fabulous work is featured on the excellent Look and Learn website and most of these paintings are available as quality prints from Bridgeman Art on Demand. Posted by Peter Richardson at 07:39