So, where were we? Right our page is being worked up in Illustrator, which I will admit I used to regard as one of the slow 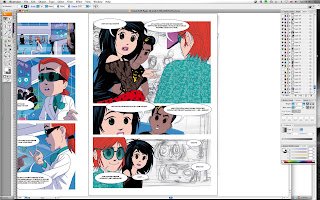 So we start to add in colours as well as adding more figures to the background of the Cloud 109 cyberlounge. With the figures in the lounge, I originally was creating them with the big eyed Manga look I'd given Gina, Cary and Rabby but it just was'nt looking right, they were too distracting and coming up with workable designs was just getting too time consuming. So I lit on the idea of trawling through various friends Facebook/MySpace albums to create an ever shifting mass of cool young bohos to waft their way through the cybernetic Babylon of the Cloud 109 lounge. This has worked really well and I do endeavour to flag up to various interested parties when they're about to make an appearance but it makes the whole creative proce 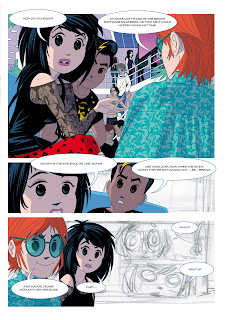 ss for me at least, much more alive, these little characters in the background really do have lives beyond their 2D incarnations.
Posted by Peter Richardson at 08:27