I'm currently in the process of creating the first in an occasional series of cover promos for Cloud 109, they won't be appearing in the finished book but they'll definitely be appearing on this Blog and places like Facebook as part of the ongoing crusade to share the world that David Orme and I are busily creating, with as many readers as possible.

So the first of these cover ideas is the notorious Dungeon of Death sequence, which is quite an extended piece and allows for a lot of character development of the three characters; Gina, Cary and Rabby and on top of that it's really funny as well as being quite stressy for the guys - are they ever going to be able to get out of those endless, monster infested dungeons???

So, as is always the case when creating a cover image the idea is to compress the idea into one image which conveys an idea of the story and helps build the tension.

I first did a few small scribbles in my A4 drawing pad, 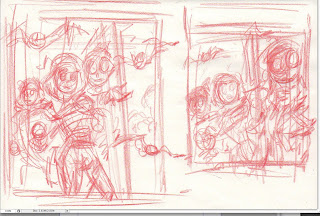 scanned them into the computer and then imported into Photoshop where I cropped the image I wanted. The one on the left really isn't working although I like the way the bats are flying out, but it's the one on the left that's got the visual dynamics and storytelling that I need. 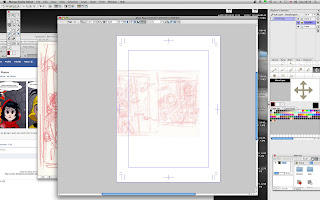 Now comes the fun part, I import the scribble into a truly wonderful piece of software called Manga Studio, which is designed for (as you might have guessed) people creating Manga comics. But on top of all the wonderful facilities it has to offer manga artists it boasts the best ever drawing tools. The quality of the pens and brushes are second to none and knock spots of the Photoshop brushes. So for this drawing it's straight in with the Kabura brush on a medium setting with my original sketch at 50% opacity in the layer below. 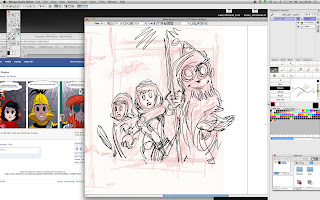 Ten minutes (if that) later and I've got a cleaned up drawing I can now work from, which you can see here with the under drawing hidden so you can see clearly how good the line work is with Manga Studio. 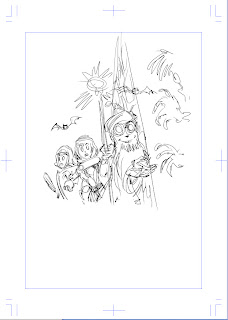 Great fun - digital artwork for me is a lot more liberating than the analogue version ever was.
Posted by Peter Richardson at 09:22