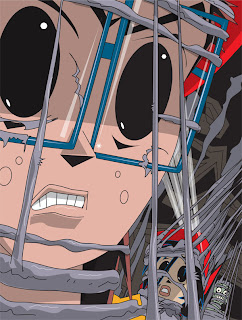 Yesterday I introduced you to a project that was not only the catalyst but also a huge influence on the look of Cloud 109. As I've already mentioned when I had the pleasure of illustrating two series of David Orme's brilliantly wacky Boffin Boy books it helped establish a stylistic leitmotif which I knew I wanted to carry forward into a full scale graphic novel.

There was a comparatively minor character named Chika who was BB's occasional oriental accomplice and Ninja par excellence. Her first appearance was me playing very safe and her costume was relatively restrained, but by the time of the second series I thought well let's just see what I can get away with and clad her in a skin tight black PVC thingy with vampiric batwing collar and my wonderful and very hands off publisher Ransom Books amazingly let it go through.

By the time I was working on Cloud 109 some two years later, I was determined that this would be the look I'd create for Gina. 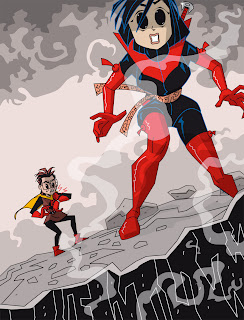 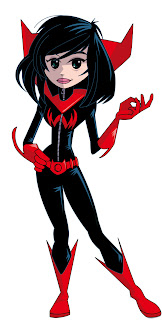