Gene, Eddie and Assorted Others in the Cloud 109 Chatroom. 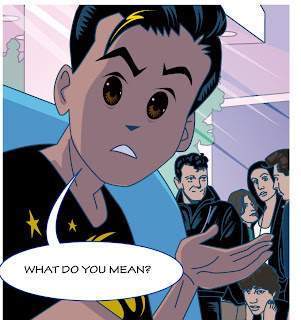 The myriad peoples who gently waft their way through the Cloud 109 chat room are not as I originally intended. When I first read David's script my initial thoughts about the chat room was that it was going to be one of the most challenging aspects of creating a believable Cloud 109 universe. The whole concept of the chat room and it's environs (there's more to this place than meets the eye) drew much of it's inspiration from the burgeoning world of Second Life, where people create fantastic avatars of themselves and have more fulfilling lives online than they could achieve in reality (whatever that is).

My initial attempts at the background characters in the chat room really were largely based on the kind of characters that people are inventing for themselves in Second Life, and after struggling with what was a never ending series of cliches and spending copious amounts of time in the process, I decided that that approach was just going nowhere.

So I had another think and decided that really a more logical approach would be to have a sucession of genuinely cool young things as a never ending cycle of visitors to the Cloud 109 cyber lounge. It did involve cyber stalking several of my Facebook friends but they seemed genuinely flattered to be cobbled into the creative process and it does seem to really work well in terms of playing with perceptions of reality, which is the whole premise of Cloud 109 and a logical thing to do. Many of the characters you see in the pages of Cloud 109 are living and breathing people, who's lives continue with their own particular dynamic whilst certain moments in those lives are frozen and transported into the world of Cloud 109. 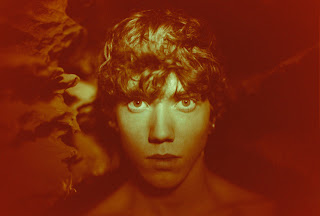 The creative process of getting these guys into the lounge couldn't be simpler, one of the characters appearing on page 9 of the book is our eldest son Jack who at the age of 21 lit off for New York a year ago, and since then has married his American girlfriend, escaped the clutches of the Mafia, been chased around caves in the buff along with a troupe of similarly naked waifs by photographer Ryan McGinley and is currently residing somewhere in Brooklyn while he holds down a job and gets his green card sorted. 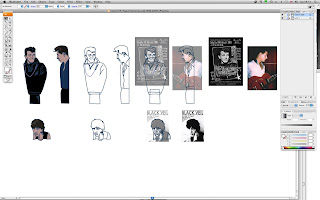 So anyway start with photo of Jack, knock back to 50% opacity,trace of in Illustrator using Pen Tool 0.75 thickness, then using the selection tool do the colour infills and any extra modelling required and at the same time adopt exactly the same process for Gene Vincent and Eddie Cochran who I just felt even though they're both sadly no longer with us, are just the kind of cool icons that we could do with in the lounge. 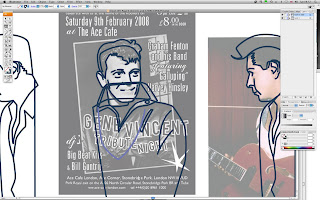 Finally and to round this piece off, the inclusion of Gene Vincent is partly inspired by younger son Tom who's also into the bequiffed black leather look and has been hobbling on crutches recently (too lengthy a tale to relate here). Anyway this beautifully angst ridden performance of Be-Bop-A-Lu-La was filmed in late 1963, with Gene his career on the wane and succombing to the diet of pills and booze he used as a self medication for the appalling pain of a twice smashed up leg, performing at a cinema in Brussels complete with French pick up band and the kind of rock n roll bravura that you're not going to see anytime soon on a TV channel near you.