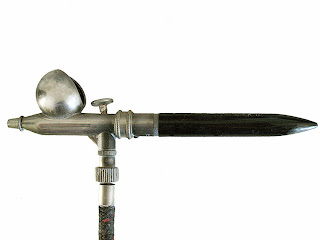 There was a time, I remember it well, when illustration was a craft as much as an art form. By craft I mean that the ingenue illustrator had to acquaint himself with tools of the trade and master various disciplines that would facilitate the smooth and seamless delivery of artwork suitable for reproduction. This involved mastering the art of stretching paper/ canvas, mixing paints, applying washes of color, learning how different paints worked in terms of drying times and the chromatic changes that accompanied the drying process. These in addition to maintenance skills such as keeping your pencils sharp all the way up to maintaining a sharp tip to your series 7 Winsor and Newton Number 3 brush (essential for inkers of comic art). This latter skill involved momentarily holding the tip of the brush over a flame to burn away any excess bristles. 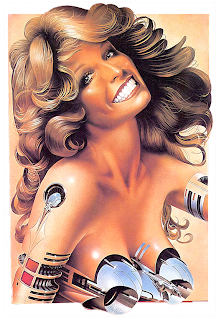 Then there was the process of preparing art for reproduction, which in the illustration pre computer, stone age lasted from the birth of photography and the arrival of offset litho towards the end of the nineteenth century all the way through to the arrival of the drum scanner some thirty years ago. Camera ready artwork was usually created twice to one and a half times up so that the artwork would tighten up when it was photographed and reduced in size for final printing. There were in truth a lot of dark arts attendant on getting the illustration from the artist's studio and into print.

And even the printing didn't guarantee that the artwork would be seen at it's optimum best, far from it in fact as a lot of stuff ultimately appeared out of register, looking for all the world like a 3D image minus the red and green specs that would miraculously pull the whole thing into 3D focus.

Bearing all this in mind the illustrator accepted that the artwork he delivered was pristine and ready for reproduction at its optimum best - no eff ups allowed! 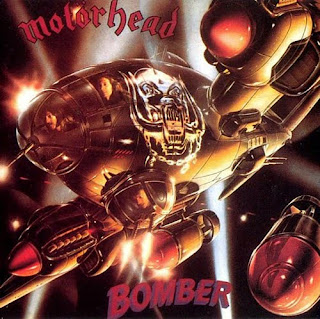 This therefore guaranteed that preparing the artwork could be a very stressful process - none more so that when employing that instrument of exquisite refinement the DeVillebis Super 63 E. This machine which is the closest you could get to owning the art tool equivalent of a Cadillac was as high maintenance as the life-style it alluringly implied could be yours for the taking - if (and it was a BIG if) you ever mastered the skill levels needed to join the big league of airbrush maestro such as Philip Castle, Alan Aldridge or Adrian Chesterman whose iconic cover for Motorhead's "Bomber" album was the toast of the 1980 Association of Illustrators exhibition. In fact artists such as Adrian Chesterman were the subject of awe struck gossip amongst many of his contemporaries as his legendary turnover in a profession renowned for being a sure road to skid row, was said to approach many of the stars whose album covers his work graced.

So yes, if you were semi serious about being tooled up for a carer in illustration Ms DeVillebis would have to be successfully wooed if not entirely bedded.

There was list of nightmare scenarios which ensured that if you didn't show her due respect Ms Devillebis would have to punish you. Usually for such was her inclination to make you really suffer, it would be at the eleventh and a half hour when the job had to be delivered camera ready.

The classic screw ups were:

1). The tube that ran from the compressor (if you were using a DeVillebis Super 63 you had to have a compressor Ms DeVillebis just wouldn't countenance one of those shitty aerosol cans) would run afoul of the board that you had your painting stretched to, as you were concentrating with beads of perspiration dripping down your forehead on the area you were airbrushing. The resultant jiggle would cause the paint in the airbrush cup to sploosh out onto your artwork. 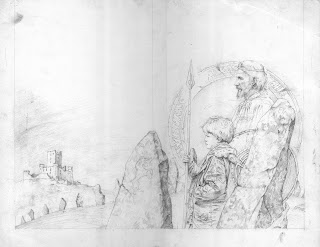 On a grading of 1-10 with ten as the apex of the major eff ups this would definitely merit a 10.

2). The airbrush would decide that it was time to cough as it had got a little tickle in it's tiny larynx, producing a myriad of little splats which invariably went right across the sky you'd just carefully painted with lots of subtle gradations. Could also be any other smooth shiny surface, the higher end the client, the bigger the budget, the more likely this was to occur. 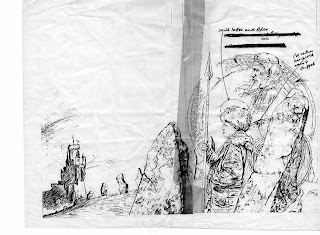 3). This by far the most common for fledgling airbrushers, involved the use of masking film. You'd painted the whole scene bar the sky and it was just stonking, the sky would be a piece of piss in comparison to all the work you'd invested in the picture. You carefully covered the whole piece of artwork in gently adhesive, transparent masking film. Then you'd take a craft knife with a new blade inserted and you would carefully cut around all the elements you didn't want covered in airbrush spray. That done you peeled away the area you wanted to spray and then taking the airbrush in your steady hand you set to work. You sprayed away until you felt that the sky was taking shape and then when you decided it was complete you peeled away the film...

What had happened is that you'd overcompensated for the sky as with the film covering the untouched areas of the painting you'd forgotten the tonal relationship to the original.

Eff up  grading anything up to 8, but it's pretty bad news if it's a large area. 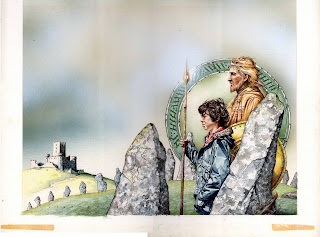 Anyway I now return rather circuitously to the Fantasical Paintings of Steve Lavis, as this is precisely what happened when Steve was finishing off his first cover for the paperback edition of Alan Garner's "Elidor". Garner had signed off on the visual which Steve had presented to the publisher Collins, with the suggestion that the child in the picture needed to be a bit older. The artwork had been completed and was due to be delivered the following day and with the evening drawing in, Steve had masked off all the beautifully watercolored areas of the painting and having sprayed away had just peeled back the Frisk Film to discover that he'd scored a hefty 8 on Ms DeVillbis transgression chart. 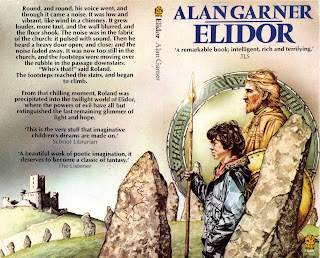 As the artist relates, having spent half an hour going ballistic followed by a long walk, he returned to the scene of the disaster and carefully cut the whole sky away. He then resprayed it and damn it all - did it again!!!

This time he circumvented any further craft knife misery and throwing caution to the winds used a can of white car primer, which then became a race against time as the primer gently melted away the Frisk film.

The resultant cover was and still is a masterpiece!

As Steve rather ruefully reflects, "When I think about it, I was 22, married and living in London working full time as an illustrator - makes me feel quite old really"
Posted by Peter Richardson at 12:21