The Spawn of Herge Part 2 - Tintin and the Pirates!!!

In yesterday's posting reviewing the work of the (imo) U.K.'s premier "ligne claire" artist Garen Ewing I did of course make reference to the great grand daddy of all such stories Tintin and work of his creator Herge. And I did rather perversely include a Tintin page which was not entirely the work of Herge. The page in question was the opening page of "Tintin and Alph-Art" which was to be the twenty fourth book in the series, which Herge eventually commenced work on in 1978, the book was still imcomplete when Herge died some five years later. 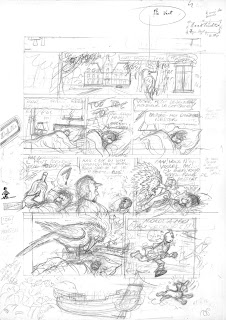 The 1980's was a period when a whole generation of young graphic artists were experimenting with variations on the "ligne claire" style and some of the artists Jooste Swarte and Ted Benoit in particular, seemed to achieve an incredible fidelity to Herge's linear style. Benoit also adopted much of Herge's storytelling flair in the adventures of L.A. detective, Ray Banana with "Berceuse Electrique" and "Citie Lumiere" as fine examples of his craft.

Many of the artists involved in the "ligne claire" movement contributed their own distinct homages to Herge  and these were collected together in a special tribute publication at the time of Herge's death in 1983. But the homages went way beyond just a page or two and with varying degrees of obsessive dedication to the cause, attempts were made to produce Tintin books that never were. 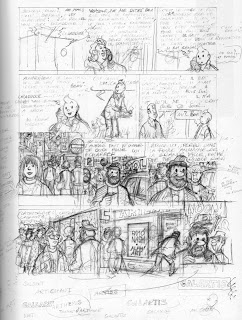 One of the most obvious launch pads for such projects was the incomplete, "Tintin and Alph-Art" which Herge had started after considering other ideas such as a story entitled "Tintin and A Day at an Airport", which involved the murder of General Tapioca by the villainous Ernst Muller as it's springboard. The book which was evidently slowed in it's production by Herge's increasing infirmity and perhaps relative lack of enthusiasm for the project was at the time of his death, 20 pages short of completion with 150 pages of alternative sketches and dialogue varying from nearly fully penciled to barely vestigial. The pages were eventually collected together and the book was first published by Casterman in 1986.

But pages from this incomplete opus were evidently in circulation before then as another edition of this book appeared in the same year and this time it was complete!!! 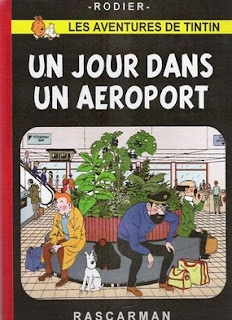 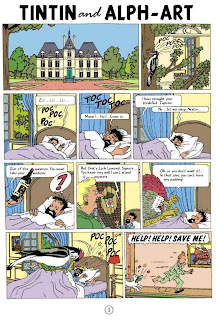 What had happened was that a young (very young - he was only 17 at the time) French Canadian named Yves Rodier had not only worked up all of Herge's drawings into finished line-work but he had also speculated as to what the resolution of this story might have been in much the manner that various authors have attempted to resolve Dicken's unfinished "Edwin Drood".

Now Rodier's book was evidently a breach of copyright but in general terms it was evident that he was doing it more as a homage rather than as a money making venture and sources close to the Herge estate regarded the project with at least a degree of indulgence. These sources included veteran artist and key player in the Herge Studio Bob De Moor (who as readers of earlier postings will recall was the man who pretty nearly entirely redrew "Black Island" in 1966.

In 1991 De Moor approached Herge's widow Fanny Remi, who was initially at least receptive to the idea that perhaps Rodier and De Moor should collaborate on producing a definitive and wrinkle free version of "Alph-Art" for publication by Casterman who were enthusiastically supportive of the enterprise. However Fanny herself was by this stage in love with Nick Rodwell,an enterprising young man who had launched a shop in London's Covent garden selling Tintin merchandise a few years earlier. 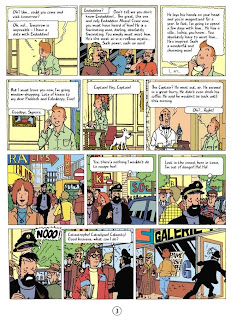 By the time the now Mrs Rodwell came to review the proposal she had evidently changed her mind and in accord with her late husband's wishes that no one should carry on the Tintin character, she declined giving the project her go-ahead.

Since then Editions Moulinsart which was founded by Mr Rodwell,  have done an excellent job in exploiting Herge's legacy with an adroit mix of commercial enterprise coupled with extreme good taste, but at the same time have been extremely litigious regarding any transgressions or infringements of the Tintin legacy. Which means that this posting might only appear for a short while, and also means that links for Rodier's "Alph-Art" which is now available in Bengali as well as a host of other languages, come and go with remarkable frequency. 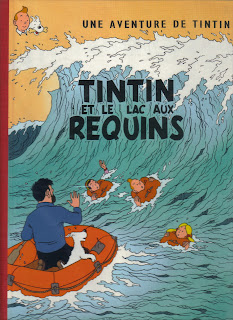 So enjoy these Rodier homages while you may - fascinating stuff. I'm also including another example by someone else based in Canada for an unpublished and never to be (although a few pages do exist) edition of a never was Tintin "Le Projet  O-Light". Could Ed and Yves be one and the same??? 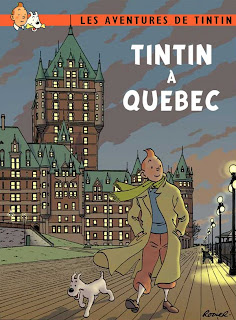 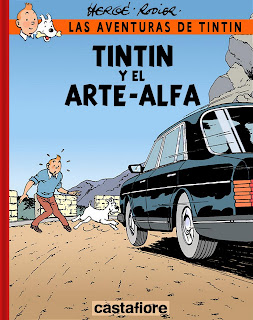 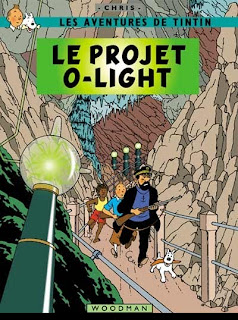