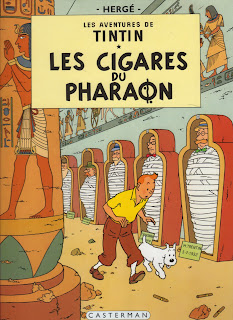 The popularity of Tintin and the work load that it consequently generated for Herge was such that for much of the post war period the small coterie of artists he would call in to help meet  delivery dates for Tintin as well as "Jo Zette et Jocko","Quick Et Flupke" and any number of design briefs, had expanded into a studio with a team of assistants, who according to their capabilities would be assigned backgrounds, research, coloring etc, etc. 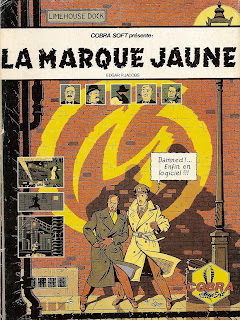 Amongst the earliest recruits was the opera loving Edgar P. Jacobs (he was by all accounts an accomplished Baritone singer), who was responsible for adding an extra layer of detail to much of the hitherto relatively spartan backgrounds. Jacobs was also responsible for overseeing the post war move into color which was spectacularly showcased by the serialization of "Prisoners of the Sun". The cover of "Les Cigares du Pharaon" includes Jacobs as one of the mummified Egyptologists - look for the red bow tie). 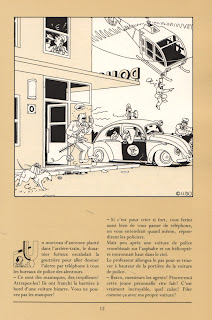 Jacobs was an accomplished artist and storyteller himself and his energies spilled beyond the confines of his work on Tintin, when in 1946 he launched the "Blake and Mortimer" strip in the weekly Tintin Journal. The style that Jacobs adopted was in truth very similar to that used by Herge. The beauty of the style which is characterized by a linear emphasis rather than reliance on areas of dropped shadow had the added bonus of being more accommodating to a studio set up where diverse hands are always liable to undermine continuity.

The adventures of "Blake and Mortimer" although never as successful in global terms as Tintin did garner a sufficiently sizeable audience for a succession of Blake and Mortimer albums to be issued and by the early sixties a distinctly Francophone look had been established for comics read by millions of children in Europe which was at a distinct variance to the much more superhero dominated product emanating from the U.S. 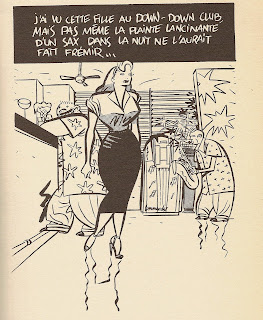 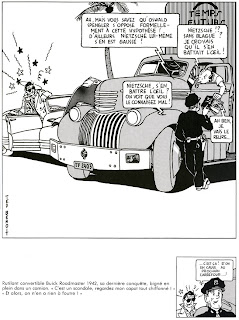 It was a look which captivated and inspired a whole new generation of young artists in France, Belgium, Holland, Spain and Italy and one which one of the artists who forefronted this resurgence, the Dutch artist Joost Swarte dubbed the "ligne clair". Also referred to as "the democracy of line", because the line itself through maintaining a consistent weight, does not lend any particular import to any part of the illustration. Emphasis is achieved through balance of color with areas of strong tonal contrast being offset by areas where the color is much more laid back. The whole effect is one of great elegance, where the eye is guided by design and nuances of color. 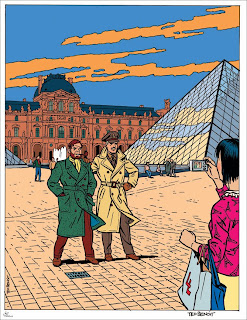 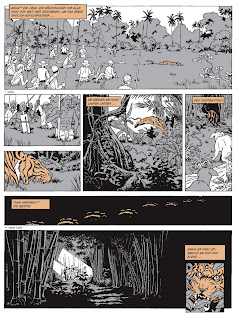 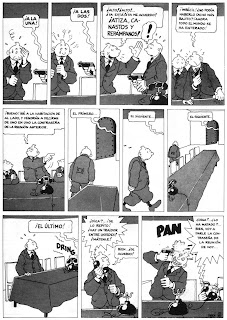 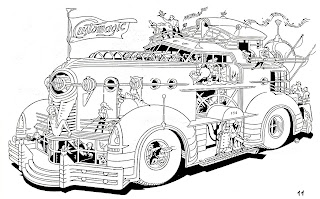 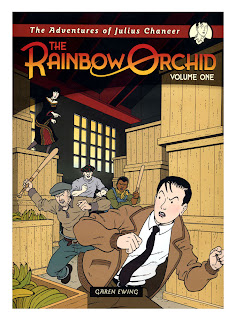 Included in the examples shown here are the aforementioned Joost Swarte, a sublime collaboration between Yves Chaland and Serge Clerc, Ted Benoit (who has created artwork for some of the "Blake and Mortimer"titles published in recent years including this color sample as well as his Private Eye "Ray Banana" who has just had a collision with an Ever Meulen articulated truck), Peter Van Dongen (the tiger sequence from "Rampoken") a wonderful Tintin spoof by Jacques Tardi (from "Les Cigares du Pharaon"),  Ever Meulen with one of his wonderfully idiosynchratic roadsters and the UK's very own Garen Ewing - more on Garen shortly.
Posted by Peter Richardson at 10:41