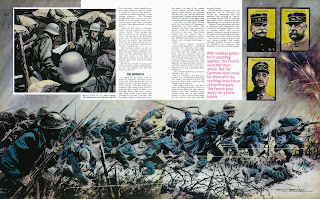 I've often found that the sheer ephemerality of a lot of the publications that I have been hopelessly obsessed with has had me pining for some kind of permanence that would enable comics to take their rightful place in the finest libraries of the world. So strong was this urge to bestow a degree of gravitas and at least pseudo longevity on these otherwise eminently disposable journals that I can still recall with a slight thrill of horror, actually taking scissors to some of my favourite comics so that I could glue particularly worthy pages into a hard bound scrapbook thereby changing their status from mere comics to proper books. The irony of course being that in the process I had destroyed the thing I loved.

Worse than that, the insanity was contagious, my dear little brother who had a near mint run of TV 21 from the debut issue, followed my example but in an act of sheer perversity actually favoured the astronomical guff that was running on the reverse side of Embleton's Stingray adventures. 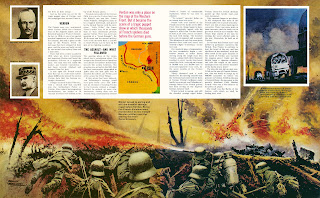 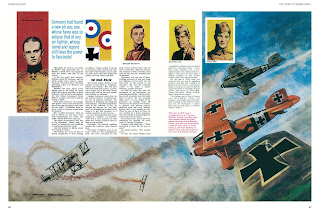 But the desire to confer some degree of semi-permanence on otherwise here today, in the trash can tomorrow culture has now reached it's apotheosis with the age of the computer and attendant digital scanning and restoration facilities. There is now a multitude of hitherto prohibitively expensive and or elusive comics that are being re-presented in hard bound collections and in many ways the whole trend is very exciting, but there are always one or two caveats and considerations. 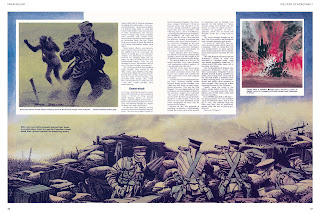 The fact that these works are now being brought into the light of day is generally laudable, but where the project often stumbles is in the process by which these otherwise lost treasures are being reproduced. The curse that applies itself like a kiss of death to a lot of the U.S. product is an insane desire by digital colorists to add their own photoshop tricks to artwork that was designed to be reproduced with flat color. The recent and now mercifully stalled Gemstone E.C. reprint series or Dark Horse's Chronicles of Conan series being good exemplars of this regrettable trend. The problems that have beset U.K. reprint projects seem to be largely budgetary, The Hawk Dan Dare Books, when computer scanning was still in it's relative infancy were sourced from color photo copies, hence the slight fizz to all the yellows, not to mention the horrendous state of the reproduction of "Charley's War". The first edition (2 volumes only) which was published by Titan Books in 1983 and 1984 were beautifully reproduced. Why then I hear you ask are the current editions so horrible in comparison? The answer quite simply is that in the intervening years I.P.C. cremated all of Joe Colquhoun's original artwork and the new editions were reproduced from scans with one can only assume a minimal budget assigned to this now critical process. Hence the parlous state of what should be a glowing example of some of the best ever art and script to grace a series of UK comics. There are similar tales of publishers cutting corners, even to the extent of not scanning from original artwork because of insurance and transportation costs, which leads to the finished product failing to quite achieve the greatness it deserves. 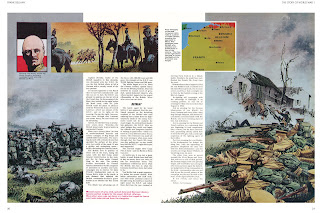 Which is why, when I do come across publishers that love and care unstintingly for the material they are releasing, I am so impressed and want to spread the word to other kindred spirits. And with that in mind, I'd like to share with you some scans from Book Palace Books recently released; "Frank Bellamy's The Story of World War 1". This book is without doubt one of the most exciting releases aimed at connoisseurs of great graphic art that has appeared over the last few years. Frank Bellamy and Michael Butterworth in creating this series for the chldren's weekly Look and Learn created a masterpiece and Bellamy himself in an interview he gave to Dez Skinn and Dave Gibbons in 1973 referred to enjoying the freedom that the series had given him in being able to experiment with a variety of techniques. 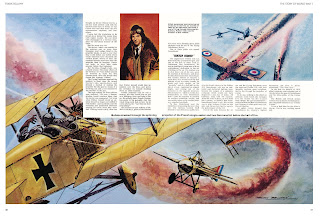 I am relieved to be able to report that the production values that were applied to this project were second to none and the quality of the scans and subsequent restoration work are such that in the case of the limited edition, which comes accompanied by a print of one of Bellamy's original pages for the series shows no diminution of quality whatsoever between the pages sourced from Look and Learn and the original print. The  book which is edited by Steve Holland (who also did a superb job on all the scanning and restoration) comes with an introduction by the noted Bellamy scholar and enthusiast Norman Boyd and also includes brief biographies of both Frank Bellamy and Michael Butterworth. 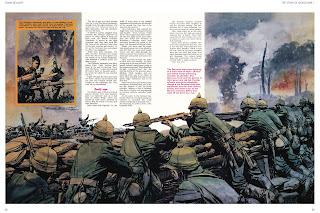 All in all an excellent addition to the shelves and a more permanent fixture than any scrapbook of these pages could ever have aspired to.
Posted by Peter Richardson at 13:06