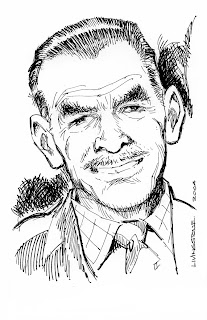 Chick Checkley's reworking of the 64 page war pocket library had a subtle irony underpinning his vision for the comic. Essentially Commando in those early years was far closer to U.S. Pulps in sentiment than it was to Fleetway's War Picture Library and the host of imitators it had spawned.

The clues were in the titles that Checkley dreamed up for those early stories, "A Guy Needs Guts", "Mercy For None", "Red Runs The River", "Knife For A Nazi", "The Death Dealers", "Lone Hero", "Death In The Sun", compared to which Fleetway's stable with titles such as, "Fight Back To Dunkirk", "The Gallant Few","Wings Over The Navy, Up Periscope", "Beachhead" etc, etc, seemed almost prosaic in comparison. The Fleetway vision was that of team work, blitz spirit, all in it together, whereas Checkley's take was much more man against the system, with the individual often depicted in torn battledress, with impressive sweat shone musculature, looking for all the world like a man you would cross the road to avoid. The thought that this was all hatched in a Dundee publishing house, more famed for periodicals such as The Sunday Post, The People's Friend and The Beano and The Dandy was really quite bizarre. 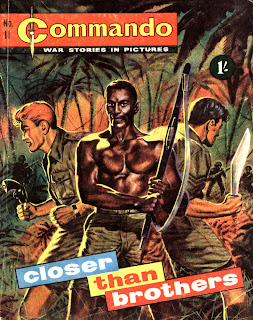 The man responsible for adding the visual punch to Checkley's prototype was Ken Barr, a pugnacious Glaswegian. Barr like a lot of his contemporaries had lived a bit, courtesy of Her Majesty's Government who had required him to spend his National Service years in Egypt where British Servicemen were not exactly flavour of the month or year come to that. Barr and his colleagues were in continual danger of death by ice pick in dark alleys, or  in the case of unwary motorcyclists, decapitation via wire stretched across lonely roads.

By the time that Checkley approached him with the job of Commando cover artist, Barr's love of U.S. comics and pulps had steered his artistic sensibilities towards a career in illustration with a distinctly bold and punchy style, his first cover art appearing on the covers of the U.K. Nebula Science Fiction digest in 1958. 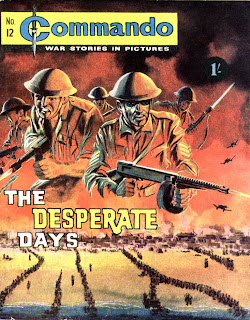 It was Barr who created the panoramic cover and who designed the Commando logo with the Sykes Fairburn knife as it's fulcrum. Sykes and Fairburn were two ex pats whose extremely colorful lives had involved them training The Shanghai Police during the 1930's and latterly the Commandos. Their innovations and ideas in hand to hand combat had included the development of the distinctive double edged blade which now adorned the logo and back cover of each issue of Commando which Barr worked upon.

Barr it was who added form and color to Checkley's intent, the characters on Barr's covers ooze Pulp chic, with bulging biceps, buggin' eyes, clenched teeth and phosphorescent backlighting. All this against a sea of Nazi regalia, swastikas, skull and crossbones, daggers and flags as de rigeur props to add yet more flesh to Checkley's fantasy. Barr it was who was the model for many of the characters on those early covers, a keen bodybuilder he was the very epitome of the tough Glaswegian, good to have as a friend but someone you wouldn't want to piss around.

Barr set the style and approach to Commando covers for the first five years at least of the series, when the amount of work got too much and covers were assigned to other artists as with issues 15 and 17, the Barr influence is still very strong. 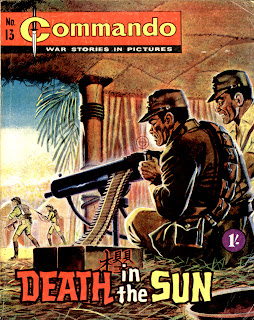 Barr's love of all things American finally involved him taking a U.S. wife and moving Stateside where he worked for D.C. producing comics for Joe Kubert and Marvel where he produced some truly spectacular magazine covers for Doc. Savage and The Hulk.

And that's not to mention all the work he produced for James Warren ...

Also be sure to check out the indispensable Commando website. 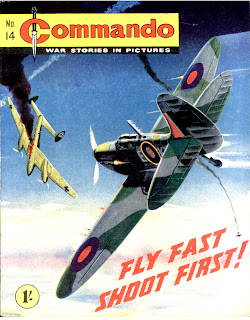 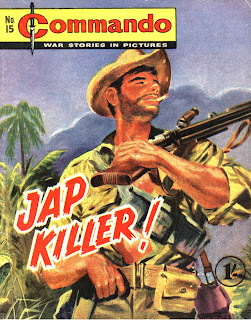 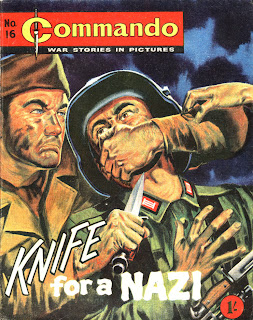 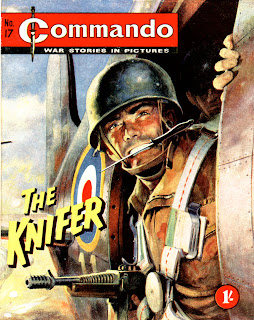 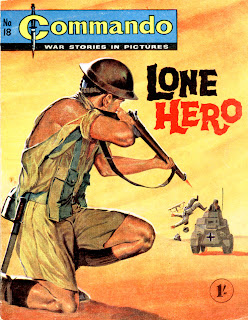 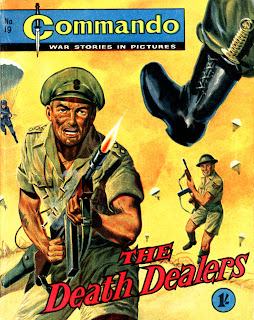 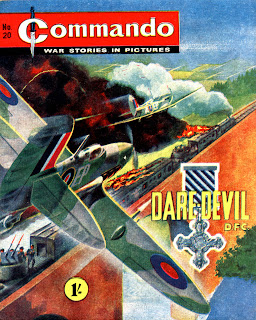 Posted by Peter Richardson at 10:08