Book Palace Books although a recent arrival in the field of publishing devoted to the revival of erstwhile long lost comic art, have over the last few years carved themselves out an enviable reputation as being the leading U.K. publisher in terms of high end production values and ensuring that the beauty of the pages they are re-presenting are not lost as a result of slipshod scanning, printing and formatting. A lot of love and care goes into the books they produce and nowhere is this more apparent than in the recently published "Frank Bellamy's Complete Swift Stories". 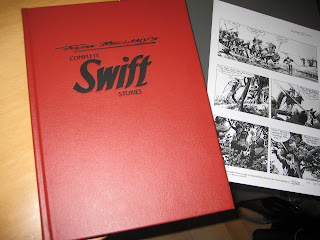 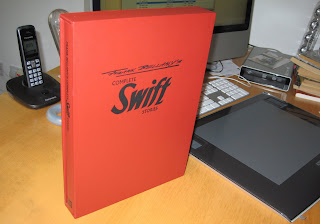 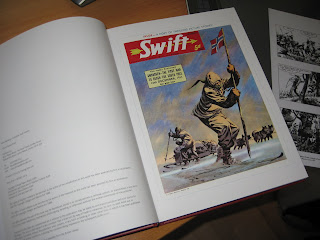 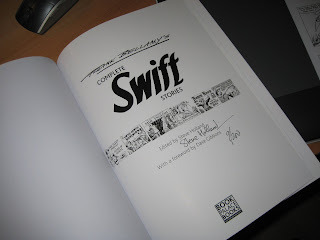 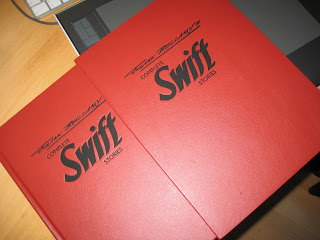 This book whilst not a casual purchase by any means, as it clocks in at £125.00, is a real labour of love and is the culmination of a lengthy project by publisher Geoff West and editor Steve Holland to ferret out all of Frank Bellamy's earliest comic strip work that appeared in the Swift Comic from 1954 onwards. Bellamy's adaptations of "Robin Hood" and "King Arthur and his Knights" have already seen print in two earlier Book Palace collections (which also include "Swift Family Robinson" which appears as a filler at the end of the King Arthur Book). 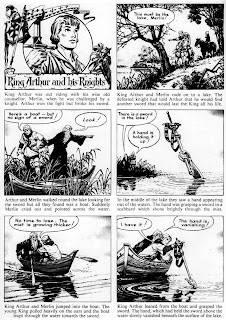 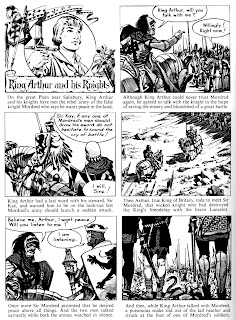 The Complete Swift edition takes all of these stories and adds in Bellamy's first Swift strip "The Fleet Family in Island of Secrets" and the crucial "Paul English", (in terms of the development of Bellamy's style from the relative pedestrianism of "Swiss Family Robinson" to the dynamics and flair of "King Arthur") as well as stories for annuals; there's a text based tale and a two page comic strip by Samaritans founder Chad Varah. 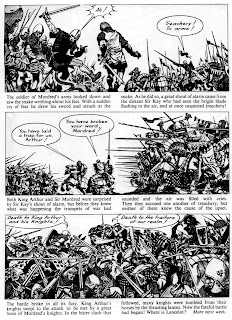 All the strips contained appear as they were originally intended in black and white with deftly applied washes of tone for added atmosphere, particularly effective in Bellamy's handling of the sun dappled gloom of Sherwood Forest in his Robin Hood strips.

Text and commentary are provided by editor Steve Holland who is a comics historian totally devoted to his subject and his knowledge of what lesser mortals might merely regard as disposable ephemera is second to none. Holland is therefore able to contextualise all the work that appears in this 300 page plus bumper tome, providing an insight into the provenance and origins of the work that Bellamy was illustrating. In addition there are biographies of Bellamy and a look at the subsequent reprints of his Robin Hood stories and how they were "toned" down content wise for a younger audience. The collection includes by way of an introduction a foreword by Watchmen artist Dave Gibbons, who helps set the tone for the experience the reader is about to embark upon. 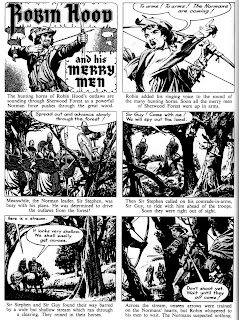 The overall effect of pouring over the contents of this collection is witnessing the development of Bellamy from a very good illustrator who had recently embarked on comic strips (at the age of 37 he wasn't a young prodigy like the Embleton brothers) to a real super star of comic art, similar to seeing Sterankos' work on Nick Fury flower and develop or the young Barry Smith's run on Conan. 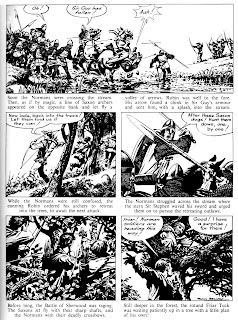 The book itself is a real work of art both in terms of it's design which neatly compliments the dynamics of Bellamy's artistry as well as in it's production providing the bibliophile with an experience second to none in terms of tactile and aesthetic satisfaction. Bound in ruby red leather and housed in a sturdy slipcase the book is a delight to hold and peruse, all of the 200 copies come with a limited edition signed print which is shot from an original page of Robin Hood artwork which when compared to the scanned and cleaned up page sourced from The Swift shows what a good job Steve Holland did with the scanning and restoration of these pages.

There's no doubt at all that with this production Book Palace Books have raised the bar on representing some of the most exciting strips ever to appear in the U.K. to a new level in terms of aesthetics and craftsmanship. It will be interesting to see what they do next. 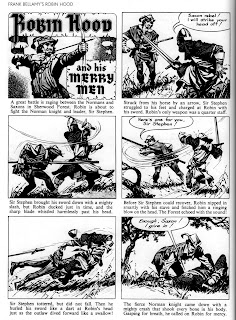 You can buy Frank Bellamy's Complete Swift Stories from Amazon Books or direct from the publisher Book Palace Books who also stock a lot of other books and comics by Bellamy.
Posted by Peter Richardson at 10:15