Here is the final episode that we're going to be posting from Gina, Cary and Rabby's adventures on Cloud 109. It's been a real treat to be able to share these with you and many thanks to all of you for being so supportive and encouraging, when all the usual self doubts attendant on any creative endeavours have assailed us, it's been your kind words that have spurred us on.

It wasn't our primary intention to make this blog as broad reaching in terms of comics as it has become, it's just that the serendipitous nature of a lot of what we do that has turned Cloud 109 into a meeting place for enthusiasts of illustration and comics in particular. We've now got links to blogs around the world (we're even talked about in Hebrew!) and one of our reviews was most recently used by the mighty Fantagraphics no less, for the promotion of the Tardi

First World War classic, "It Was The War of the Trenches 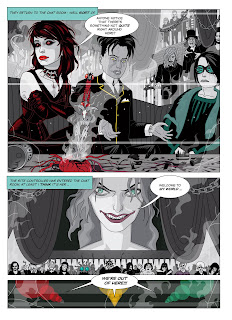 And talking of reviews, that is something that we'd like to do a little bit more of over the next few months, we love the stuff from times past but we don't want to lose sight of the present either, so we'll be looking at some of the new and exciting comics that we're passionate about and want to share it with you and even debate with you, so keep your comments coming - it's what keeps this blog alive and moving forward. 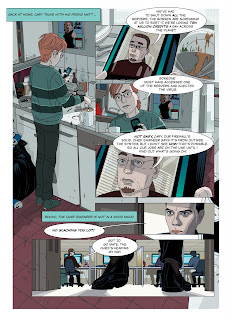 You guys are what makes this blog what it has become - seriously, so keep your comments coming so that we can mentally add you to the list of people we think of when choosing stuff to run on this blog; "Would Dave (Morris) I wonder have seen this one before?", "I wonder if Phil (Rushton) will enjoy some more Embleton?", " I wonder if Leeann has seen this artist before?", "Must run this one past James (Corcoran)". 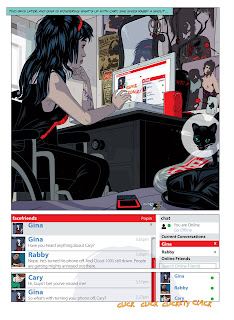 You've all become friends and compatriots in our ongoing quest for sharing comics and keeping you updated with developments in the world of Cloud 109. And while we may be hanging you out to dry as regards what's happening next in Gina, Cary and Rabby's quest to uncover the source of the mystery virus that's assailing their virtual world, we're still going to tease you just a little bit with bits of artwork, a panel here a sketch there or maybe even a page or two from book 2 and 3 which David will shortly be putting into production. 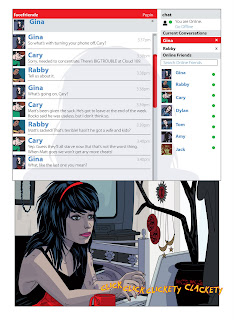 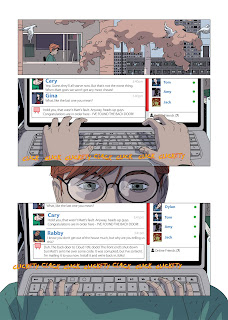 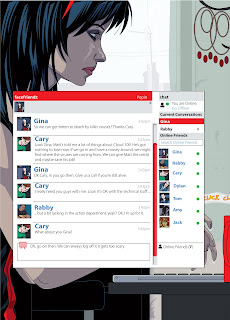 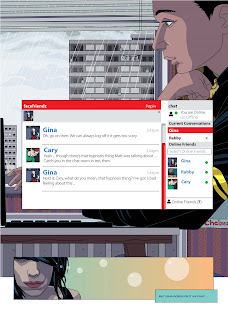 But for the moment here's page 25:

and here:
Posted by Peter Richardson at 09:28