Supermen, Syphilitic Cowboys And A Surfeit of Batteries - The Early Years of Harvey Kurtzman 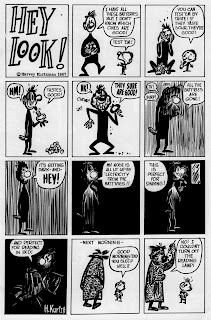 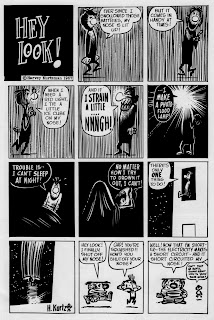 Harvey Kurtzman's curse was the curse of the true artist the curse of always, always thinking outside the box. His keen sense of the absurdities of life had been with him from the early days, when as a kid growing up in Brooklyn he had created his first comic "Ikey and Mikey" which he scrawled on a daily basis on the sidewalks of his neighbourhood. 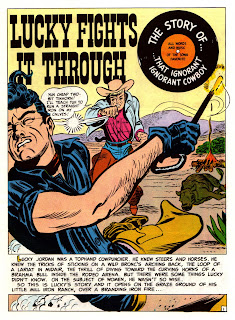 He'd embarked on his comic book career upon returning from the war in 1945 working on a string of second banana superheros, but superheros were not Kurtzman's natural metier - too formulaic, too predictable for an ideas man like Harvey. But he needed work and in a fortuitous way it was Stan Lee at Timley/Atlas comics whose need to fill unexpected page gaps when advertising wasn't forthcoming that provided Kurtzman with a platform for his talents to shine. The brief was a gift to a man of Kurtzman's capabilities all he needed to do was create one page strips, which under the title "Hey Look" provided free rein for his take on a myriad of zany themes.

By the time that Lee tired of the idea of one page fillers, Kurtzman had created an impressive backlog of samples with which to trudge the streets of New York as he sought some degree of financial security for himself and his newly wedded wife Adele who he'd met at Timely. 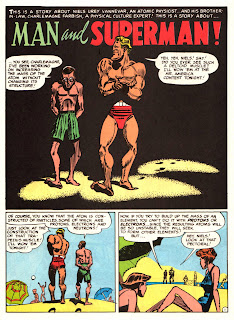 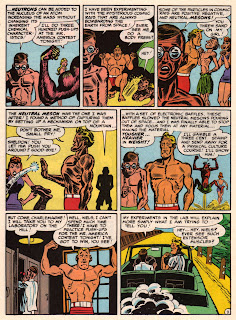 One of his ports of call was 225 Lafayette Street, home of ; E.C. as in Entertaining Comics because the recently deceased Max Gaines' son Bill was now running the show. Trouble was that Kurtzman was trudging up the stairs with his folio of samples in the misapprehension that his destination was still E.C. comics as in Educational, the sort of publisher that would actually even want to publish such dire tracts as "Picture Stories From The Bible" or "Picture Stories From World History". So when Kurtzman was ushered into Bill Gaines and Al Feldstein's office he was a little taken aback to find complete regime change and comics with titles such as "Crime Patrol", "Saddle Justice" and "A Moon, A Girl, Romance" littering the desk. 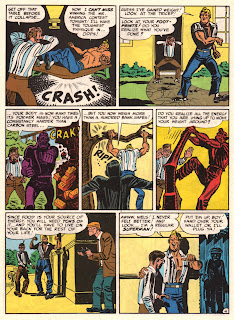 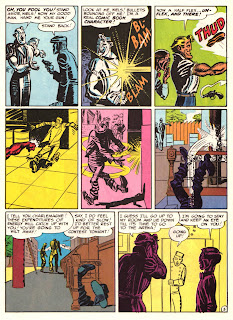 Gaines and Feldstein looked at the contents of Kurtzman's folio, loved what they saw, laughed uproariously at the "Hey Looks" but just didn't quite know where to place Kurtzman, but being the helpful guy that he was and wanting to keep Kurtzman in the loop Gaines introduced him to his cousin David, who was a little bit more on message as regards the Max Gaines legacy and was producing a comic warning of the dangers of STDs out of the E.C. offices under the title "Lucky Fights it Through". 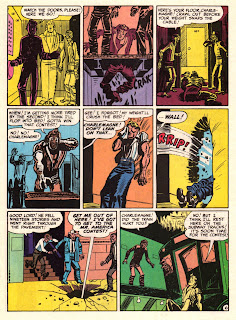 Kurtzman knuckled down and produced the sixteen page comic complete with "Lucky" song sheet. The story of the naive young cowboy and his battles with the dastardly foreman Handsome Hank and the ravages of a careless night with a saloon girl became Kurtzman's first comic production for the Gaines family. When Gaines and Feldstein moved their comics in the now familiar direction of horror suspense and science fiction, Kurtzman was invited on board with his first E.C. story "House of Horror" which appeared in The Haunt of Fear No. 15, other stories for The Vault of Horror

and Tales from the Crypt

Kurtzman was never all that happy with his horror work but E.C.'s science fiction comics were another matter entirely and the following story that appeared in Weird Science

No. 8 under the title "Man and Superman" shows both Kurtzman's desire to educate coupled with his delightful sense of irreverence, as we witness Charelmagne Farbish's self sacrifice at the altar of physical culture.

The definitive take on this artist's life and work is the recently published; "The Art of Harvey Kurtzman: The Mad Genius of Comics" by Denis Kitchen and Paul Buhle. 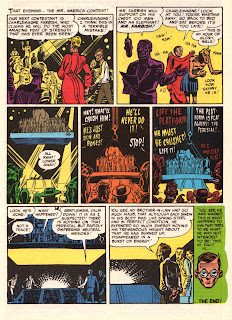 Posted by Peter Richardson at 10:32