Batman Archives and the Arbitrary Nature of Comics Restoration 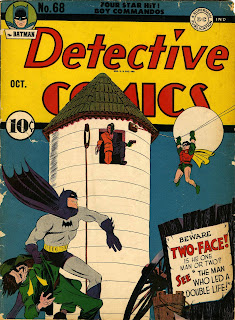 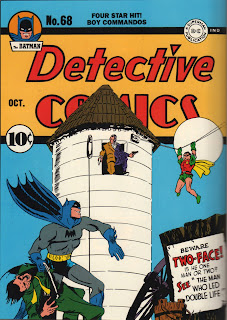 DC Archives Editions have been with us for a long time, in fact over twenty years and as such they provide an interesting insight into the oft times problematic craft of re-presenting U.S. comics golden age to a modern audience. I say modern audience slightly tongue in cheek, more likely old farts who even if they haven't sold off their collection, or consigned it to a plastic tomb (aka slabbing) are probably a mite apprehensive at actually turning the pages of seventy year old comics for fear that either they or the comics might not be equal to the task. 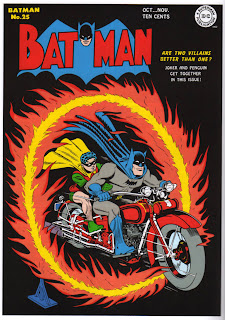 The only series I have stuck with and this out of sheer nostalgia, are their Batman reprints. These are as good an indication as any about the vagaries of the restoration process. As has been discussed here before, there have been all kinds of learning curves involved for the people tasked with revitalizing these comics. Even setting aside their recent experiment with presenting verbatim color scans of pages in some of their Simon and Kirby reprints, there have been some real inconsistencies which are fascinating and frustrating in almost equal measure.

Take for instance Batman Archives Volume 2 which collected some of Jerry Robinson's earlies stories from Detective Comics, where not only were some covers badly redrawn as DC no longer had complete copies of all issues, but to further compound the disappointment, no allowance was made for the fact that the paper the comics were being printed on was glossy and less absorbent than the newsprint that the colors had originally been intended for. Which meant that everything looked hideously garish and the purple of the Joker's suit was so dark that all the line work simply disappeared into a morass that was even darker than John Carpenter's Dark Star. To any serious comics devotee this was a heinous crime of unparalleled magnitude. Even the burning of the library of Constantinople seemed fairly mild in comparison.

However things have gradually improved although there are still minor setbacks. To my mind the best volumes in this series so far are The Dark Knight Archives 4, 5 and 6. Volume 6 is a particularly impressive affair and as I have owned many of the comics reprinted in that book I was perhaps more aware of what could have been lost. The work that has been done on these pages is simply astonishingly good. All the color has been stripped out without losing any obvious detail to provide black and white linework with new color added digitally. This is still a weak area in some respects as there are totally inappropriate gradations and airbrush efx that still creep in from time to time. 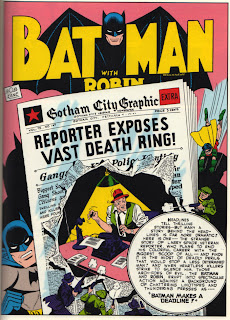 But and it is a big BUT, the linework on these volumes is superb. Just check this sample with the original splash page from Batman No. 24's lead off story It Happened in Rome with the recent Dark Knight Archive 6 reprint to see what I mean.
So I really was looking forward to seeing the latest in the Dark Knight Archive series, but sad to say although covers such as this beauty (Batman No. 31) are superbly reproduced, others (Batman 27's hideously heavy red on Santa's cheeks) are not and what is worse the contents are also badly restored with lots of drop out of detail and in fill of feathered blacks as in the Jerry Robinson page shown at the end of this posting.


When you check the sources of the digital restoration you find the possible cause of all these inconsistencies as this work is farmed out to a variety of sources. But be that as it may, these books are still the most affordable way of viewing these old treasures from U.S. comics infancy and I can only hope that DC stick with the project a little longer. 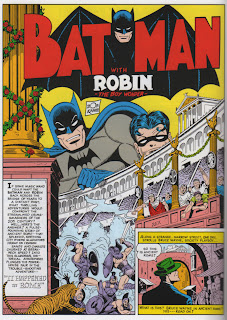 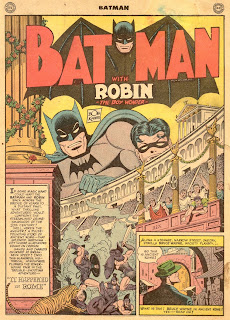 Crap Layout courtesy Blogger Interface (aka I tried and tried with this one but in the end...

gave up)
Posted by Peter Richardson at 22:04