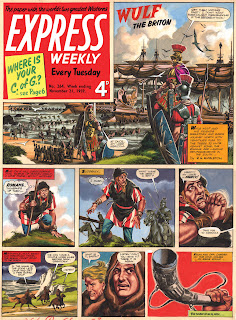 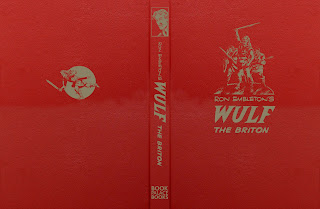 Just one image from the original artwork which I think proves beyond any doubt that Ron Embleton's Wulf the Briton strip was in a league of it's own. When this image appeared in late 1959  a succession of truly awesome Wulf covers had eclipsed even the best output of the Hampson studio. Never had artwork of this caliber been seen in a UK comic and for comic creatives such as Frank Bellamy, Don Lawrence, Mike Noble and John Burns, Embleton had yet again raised the bar.

Unbelievable that this strip has fallen out of the collective comic consciousness for so long. 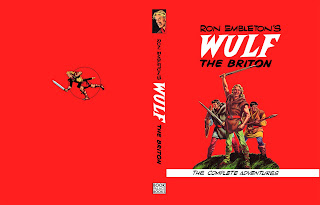 But not for much longer; all the work (including several eleventh hour additions!) for the Wulf book published by Book Palace Books has now been completed and the approved files will heading off to the printers by the end of the week. Two editions including a luxury limited signed and numbered red leather, slipcased edition with 24 extra pages devoted to reproductions of some truly stunning Wulf original artwork will at last collect together all of Ron Embleton's Wulf The Briton, with some truly insightful contributions from friends and associates of this remarkable artist.
Posted by Peter Richardson at 13:18