Robotika - The Weird and Wonderful Worlds of Alex Sheikman 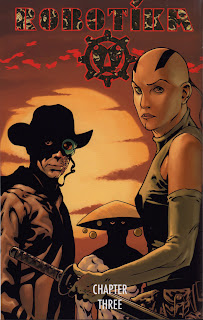 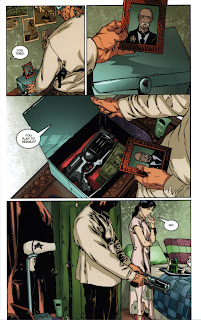 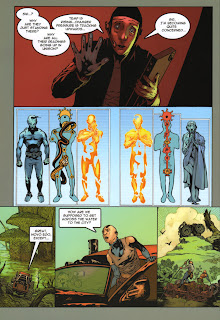 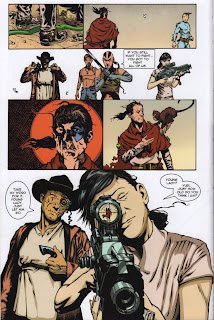 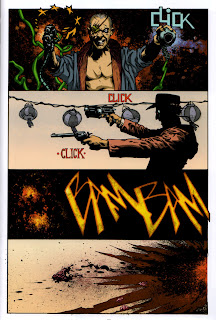 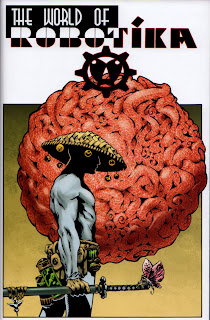 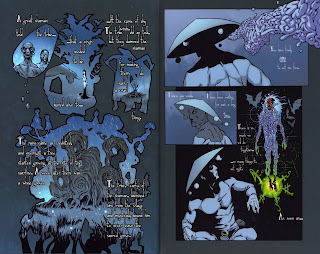 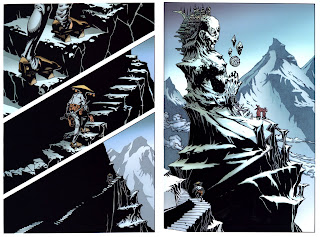 Now here’s a bit of serendipity for you readers; but one of the joys of blogging is the ability to reach out and meet and get to know people from all around the globe, via a shared passion. Not only am I getting to hook up with people I would never have otherwise met, but also as time progresses I become aware that people are also conversing with each other which just adds to the fun of the occasion.And here’s a tip for creatives but if you leave a comment on a blog and also have a Blogger profile, chances are that native curiosity will impel the blog host to check out your blog, which is precisely what happened when a visitor named Alex Sheikman left some extremely well informed comments on a posting I did some weeks ago.
I just couldn’t resist, here was someone who had an in depth knowledge and appreciation of both U.K. and U.S. comic art and when I checked out Alex’s profile it also transpired that he had a blog and website of his own and was also an illustrator who had his own graphic novel called “Robotika”. 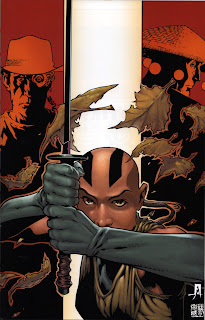 From the samples I could see on his website and blog I could tell that Alex’s artwork was a heady cocktail of some of really tasty influences, Jim Steranko, Mike Mignola, Alex Nino and even Alphonse Mucha, immediately sprang to mind, but underpinning all the hip references was some seriously amazing draughtsmanship, convincing story telling and knockout page design.

Dammit this guy had it all!!!

I thought I’d torture myself a bit further so I checked out the availability of his work and it transpired that he’d been on this “Robotika”  gig for a few years and there were two books in print via an independent and delightfully eclectic outfit under the name of Archaia Comics. So keen to see Robotika in greater depth I subjected my credit card to yet more abuse and awaited the arrival of “Robotika” and it’s recently published sequel “Robotika - For A Few Rubles More”, a title that hints at Alex's Russian ancestory as in addition to all his other accomplishments, it turns out that English is his second language, having spent the first twelve years of his life in the USSR (the experience of living with two languages informed his  creation of Cherokee Geisha's weird vertical speech balloons).

“Robotika” is every bit as good as I had hoped, the story is like one of those epic samurai quests with a lot of action, violence and gore thrown in. But where it scores big time is in the characterisation of the three main protagonists Niko the Samurai sword wielder whose zero charisma quotient is more than compensated for by his road buddies C.G. (Cherokee Geisha), shiny of head and vertical of speech balloon whose sardonic sense of humour has a leavening effect on the mute earnestness of Niko and Bronski the mercenary who views the world through the eyes (one organic the other cybernetic) of a pragmatist rather than philosopher.

But that’s just for starters, where for me the Robotika books really come into their own is in Sheikman’s ability to create a world that extends well beyond the immediate narrative that drives these stories. It’s a world where cybernetics and weird and disturbing mutant organisms counterbalance each other, a world of beauty and unease and as a totality the world that Sheikman has conjured up is truly convincing and leaves you hoping for more in this compelling odyssey.

and 2: For A Few Rubles More 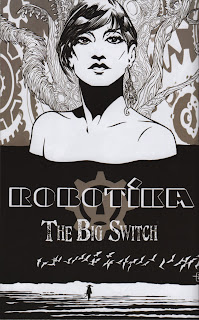 and Alex also has a sketchbook which won't be around for ever so get it while you can guys, check out Alex's blog.
Posted by Peter Richardson at 07:53