Bernard Krigstein - The Last of the EC Visionaries

Bernard Krigstein was a late recruit to the already impressive roster of artists working for Bill Gaines legendary line of comics. In fact he was so late that under normal circumstances he wouldn't have been hired as by 1953 the commissioning team of Gaines and editor Al Feldstein had more than enough artists on their books to fulfill their requirements. 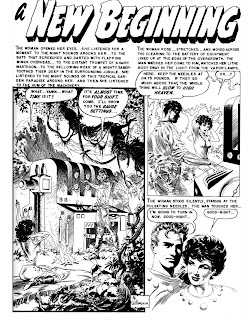 It was in fact Harvey Kurtzman editor of EC's two war comics and the recently launched and about to start a revolution of it's own Mad, who made the recommendation and as far as Gaines was concerned a thumbs up from Kurtzman was good enough to secure his attention. Krigstein was invited to bring his folio up to the offices at 225 Lafayette Street and by the end of the meeting walked out with one of the most inappropriate jobs Gaines could have ever chosen for a man of Krigstein's abilities. 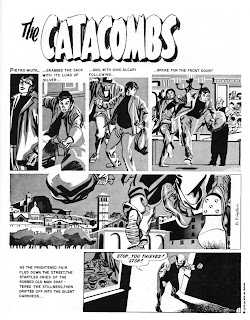 The assignment which was now tucked into Krigstein's folio was eight pages of pencils by Al Williamson, who was running late on a science fiction story for what would be the last issue of Weird Science before it merged with it's sister publication Weird Fantasy. Asking Krigstein who's line work was gritty and contemporary to ink Al Williamson, whose work was suffused with a lush and overtly retro feel was obviously more motivated by Gaine's concern over a possible missed deadline than it was any aesthetic consideration.

The result was as near a disaster as one can get in terms of unsympathetic inking and when Williamson saw the partially completed pages he was appalled and swiftly summoned up the forces of Frank Frazetta and Roy Krenkel to attempt to salvage the mess. The result was one of the most elegant Al Williamson jobs ever to appear in the EC sci-fi comics. 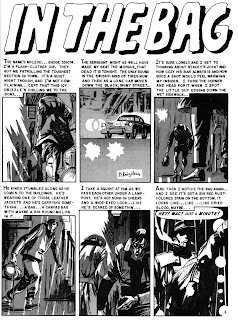 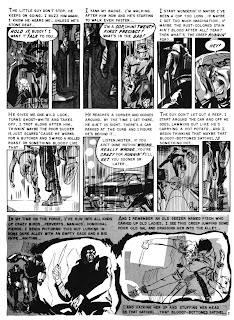 But despite this less than promising start Krigstein started receiving scripts from Feldstein and as he worked on them so his enthusiasm for the material he was working on grew until he was pleading with Feldstein for more pages to do justice to their full potential. Feldstein ever the pragmatist said no to the increase in page allocation, motivated not just by budgetary constraints but also by the format that he had established for the comics many years earlier, i.e. lead story 8 pages, second story 7 pages, third story 6 pages and final story 7 pages. He did however suggest that Krigstein could create more panels and they would letter up the pages accordingly. Krigstein slightly balked as it meant drawing more content for the same page rate but it was either that or nothing so Krigstein started cutting up panels to create more opportunities for his storytelling to flourish. 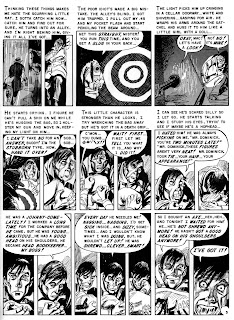 Krigstein wouldn't give up on his requests for more pages and it was a story slated for an issue of  Crime Suspenstories (issue 26 to go with the cover that Kamen had already drawn) that was to push Krigstein to completely usurp his role as mere artist for hire and challenge Feldstein's editorial authority by adding an extra two pages to "Master Race" and create a long term comics masterpiece about man's inhumanity to man but a short term headache for Feldstein who now had a story that wouldn't fit the comic it was originally commissioned for.

"Master Race" has now become a comics legend, reprinted and re-examined so many times that it would be tedious to add anything further to the discussion. What however remains of Krigstein's EC output is a raft of stories where the artist was constantly experimenting , cutting up panels, running dialogue in the text boxes rather than their own balloons as in "The Catacombs", adding cinematic touches such as lens flare and motion blur and constantly pushing the boundaries of a medium which is cursed by cliche. 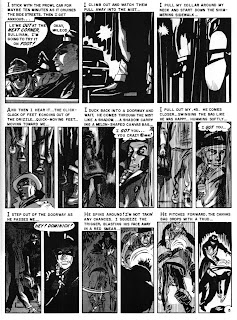 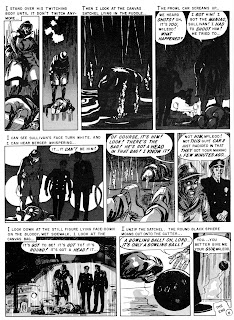 Here is an example of such a story, scripted by Carl Wessler for the last issue of Shock Suspenstories, "In The Bag" represents the peak of Krigstein's creative hiatus with EC after this it was a gentle drift downhill, with Feldstein's intransigence over page allocation and a drop in page rate from $41.00 to $35.00 and the ongoing delay in the publication of "Master Race" undermining Krigstein's passion for an art form that at the time he regarded as on a par with painting.