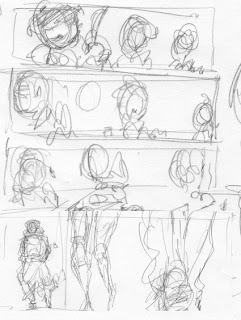 Although this blog has morphed itself into something of a gallery of vintage illustration and comic strip art, I do occasionally like to flag up the ongoing work in progress that is 'Cloud 109'. David Orme, as my fingers weave a mad tarantella over the key board is busily working up books 2 and 3 in this epic adventure, whilst I continue to head towards completion of the first book - all 60 pages of it. Which I used to think was a biggish deal until I stumbled over the life altering experience of Dave, Leo and Nikos's epic project Mirabilis which clocks in at a mere 200 pages and that's just one book out of four.

Anyway I thought just as a break (for one day) I would show you the process by which I build up a page for Cloud 109 as we all have different ways of achieving our artwork and mine is I know different to the way a lot of artists work and has consequential advantages and disadvantages which we can consider as I take you through the process. 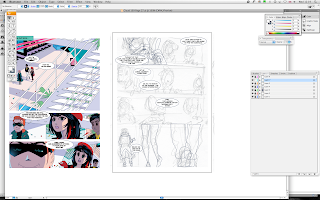 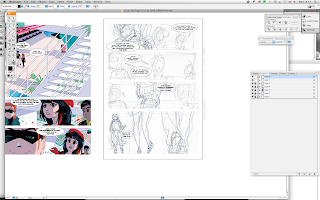 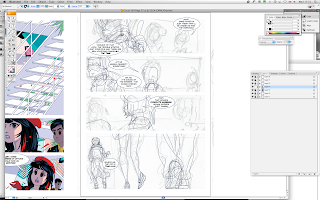 Stage 1 for me is to read through David's minimal script directions (he's so trusting!) and then grab a pencil and draw in an area not bigger than the size of a pocket calculator the page in question. When I'm doing this I'm thinking in cinematic terms, rather than worrying about the drawing too much, that can follow later. So I throw in some lines and once I'm beginning to feel we might have something credible going on I then import the drawing into Illustrator. 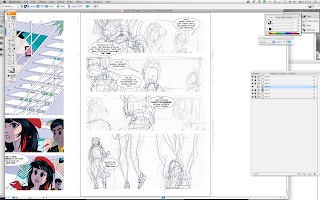 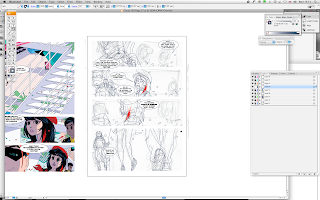 Now Illustrator is really where my work parts company with a lot of other practitioners of this craft and it does have a lot of perceived disadvantages in comparison to Photoshop which has a much more accessible interface. The disadvantages of Illustrator are that at first inspection it presents a really tortuous way of creating artwork, insofar as you create the shapes and outlines by use of a pen tool which creates points on your image which are joined by vector lines which can be pulled and distorted to your heart's content - it's just a very different experience to the immediacy of working directly with a pen and/ or brush and then scanning in the artwork for coloring in Photoshop. 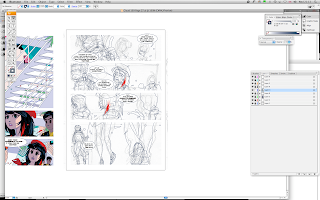 But the very anality of Illustrator is where it scores big time in the long run. As any illustrator will tell you, these days all illustration is subject to "comments" from commissioners. Comments in this case equating to alterations, pointless questioning these, times are tough so you just get on and do them. With Photoshop created artwork this can be a real headache, but Illustrator is software designed to appease committee driven commissioners. It's just really easy to change shapes and colors on vector artwork in a way that makes me at least question why I would ever want to return to Photoshop.

And for a project like Cloud 109 Illustrator is a joy to work with, it means that I can make further refinements (which I do) as the project proceeds. I can even import elements effortlessly from one image to the next should I need to, and you literally won't see the join or any differentiation in pixel resolution because there are no pixels whatever in Illustrator it's all vectorized, clean, elegant lines. 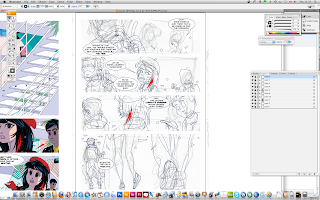 It also is ideal for the necessary reformatting that launching your books onto apps will involve, so illustrator is the way for me to go.

So here are the first stages of creating a page of Cloud 109 and by the last image although it's still linear we're nearly there in actuality. As you can see working in Illustrator allows me to work from near vestigial gesture drawings, which in some cases take a couple of stabs or so to get right, but I always have the original drawing on a layer underneath a white layer set at 50% opacity to act as a guide and fulcrum. Lettering goes in very early too as it helps to assess just how much space we have to play with as well as injecting life into the artwork. These are real characters emoting and driving the story.

More to follow soon...
Posted by Peter Richardson at 11:28