Theakstonization!!! - A Plastic Magnifying Glass and The World's Finest Comic 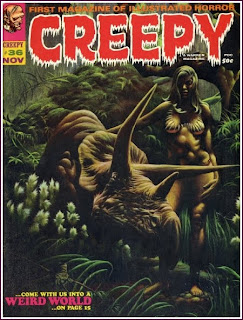 Back to a second look at Creepy 36 , which is a good example of the period when the Warren line of comics were well on the road to the recovery from the awful nadir they had endured in the late sixties, when page rates were slashed, editorial and office staff were let go and many issues of Creepy and Eerie had been entirely devoted to reprints. Vampirella was the turning point for the Warren Empire and as funds replenished the once empty coffers, so new art and script were being sourced. Some of the artists were to become regulars, some were just passing through but all of their creations were interesting and some were brilliant. 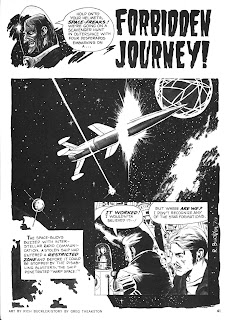 The following story would I suggest, fall into the interesting category as it featured the early artwork of an artist who would develop his own very elegant take on the grace and romance of the silver age of D.C. comics. Rich Buckler who ended up drawing pretty nearly all the characters he's poured over as a kid and went on to create Deathlock had networked through the fan groups that had started coalescing throughout the late '60's, and it was as much his energy and enterprise as well as his innate talent that got him working for all the major companies from the early '70's onwards. He was one of the young hopefuls who attended The Detroit Triple Fan Fair which would have also been attended by another teenager energetically producing home made fanzines, who was to provide the script for "Forbidden Journey", which in all other respects is yet another homage (think of those Bruce Jones artworked stories we've featured here) to the work of the Al Williamson EC team. 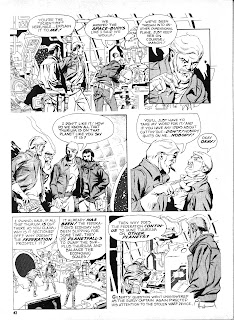 Greg Theakston had entered into a lifelong love affair with comics when his elder brother had returned from a trip to a dime story with a plastic magnifying glass and a copy of what he described was the "world's finest comic" - "look, it says so on the cover". The younger Theakston was mightily impressed as he gazed at the contents, he was already familiar with Superman but he hadn't come across the guy with the bat costume before, he looked pretty cool too. 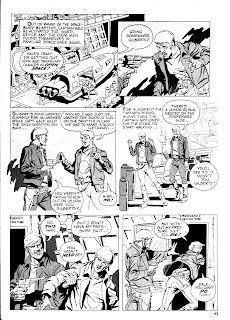 Theakston's mother in an admirable bid to widen her boy's scientific comprehension of the world around him pointed out to his that Superman's face wasn't printed pink it was actually composed of a lot of tiny red dots, which as Theakston hauled himself across the veranda to examine the page with the aid of the plastic magnifying glass could see was indeed the case. He was also hypnotically fascinated by the pool of light he could see on the pages as the sun's rays illumined the surface of the comic, he was also mesmerised by the smoke he cold see emanating from the centre of the light pool. It was some twelve holes in before his brother realised what was happening and snatched the now degraded comic back. 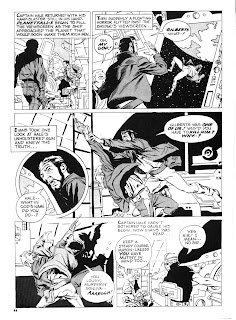 But the damage was done in more ways than one as Theakston became more and more obsessed with comics and comic art, to the extent that at the age of fifteen he was producing fanzines devoted to the work of his all time comics hero Jack Kirby. He even invited Kirby who was busily producing gargantuan quantities of artwork for The Fantastic Four and a host of other Marvel titles to attend their Detroit Convention. Kirby was of course way too busy but upon hearing that Theakston had helped organise the event and having profoundly happy memories of his own  experiences of being in a boy's club, invited Theakston to be his biographer and thus was another chapter of comics history written as the teenageTheakston vowed to himself that come what may he would indeed fulfil the honour that Kirby had accorded him.

Greg Theakston has gone on to become an artist, writer and publisher and has worked with pretty nearly all the top talents in comics, in fact after graduating in 1971 he went straight to work as Jim Steranko's assistant, he has also worked closely with Neal Adams and the late Dick Giordano who coined the term, "Theakstonization". This term refers to yet another of Greg's lifetime missions which is to bring to life comics which through scarcity, sheer expense or a mixture of the two would be unaffordable for most enthusiasts.

The process which Theakston has been employing for over a quarter of a century involves sourcing old and battered copies of comics and then bleaching out the colours. With the work that he did on the Spirit Archives, he then scanned in the pages and printed them off at 200% in much the way that the original art would have been sized. He then worked over all the damaged lines with a pen/sable brush and ink to reinstate all the original line work.

Little did Ma Theakston realise what she had unleashed when she handed the six year old Greg the plastic magnifying glass. 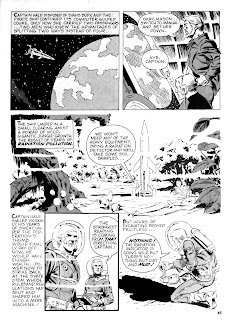 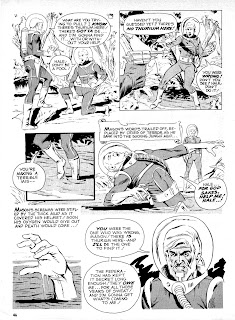 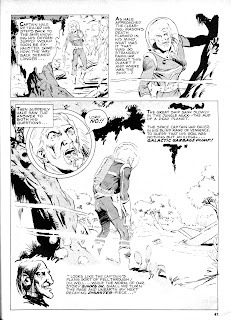