More of the Dark Stuff - The Pulps - The Bloody Pulps

Art responds to the environment that surrounds it, trends come and trends go like a succession of waves re-etching the shore line. Nowhere was this maxim more true than in the wake of the passing of the first golden age of illustration, best epitomized by the work of illustrators such as Howard Pyle, N.C. Wyeth and Maxfield Parrish. These men lived like princelings richly rewarded by the surge in popularity of the mass circulation magazines that were their patrons, magazines such as Colliers and Scribners; spawned by the 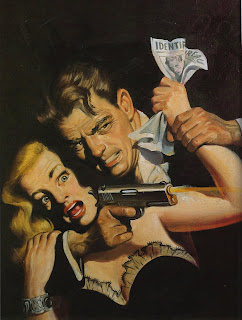 revolution in color lithography that occurred around the turn of the last century. The meager returns that their forebears had had to endure were now but a distant memory. These men regarded themselves as heir to the tradition of fine artists working on commission for wealthy patrons, only their patrons were publishers not Renaissance aristocracy.

It wasn't to last and with the American slump of the 1930's there arose a new generation of artists whose brief was entirely different. These were the pulp artists, pulps being the polar 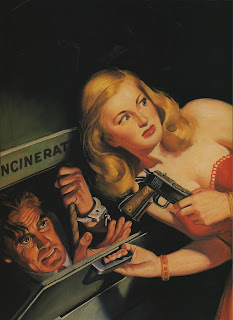 opposite of The Ladies Home Journal or Good Housekeeping Magazine, these things were printed on cheap newsprint, the most expensive part of the production process being the covers which did utilize colour lithography but even there deals would be cut by merciless publishers leaning on print houses all too desperate for work in the lean times they now faced. In keeping with the general tenor of the times the previous generation's ideals of heroic fantasy went out the window as artists working for often appalling rates of pay and merciless deadlines created schlocky artwork to pander to the testosterone fueled fantasies of a generation of frequently semi-literate men. Women in this male dominated world were transformed into objects of lust to be depicted in various degrees of violent undress, victimized by male tormentors replete with guns, branding irons, whips - you name it! A trip to the seedy offices of these terminally non PC purveyors of 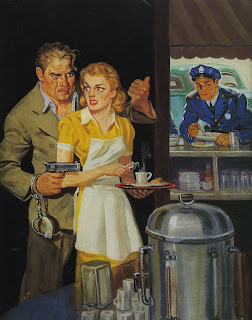 violent fantasy would confirm your worst suspicions. Once past the jaded receptionist, a lonely token of femininity in a world of stale musk and cheap after shave, the environment beyond was indeed hell's kitchen, editors were men with fists like hams, boots with studs to pulverize unworthy artwork, sweat stained shirts, green visors, half chewed cigars and irascible temperaments. You had to be a hard-boiled cookie to even consider working for dese' schmucks.

But with a delightful twist of irony, the artists producing this work were real gentlemen and one of the premier artists of this hard-boiled world of rampant misogyny was perhaps the gentlest of them all. When Rafael De La Soto first arrived in New York in 1923 he could barely speak a word of English but he was determined to find work as an artist and through a variety of jobs he did eventually graduate to becoming one of the premier artists of the Pulp school of illustration. His background was entirely at variance with the subject matter he was engaged to produce. He was in fact born on the island of Aguadilla off the coast of Puerto Rico and as a result of the early death of his father was raised in a Catholic seminary and 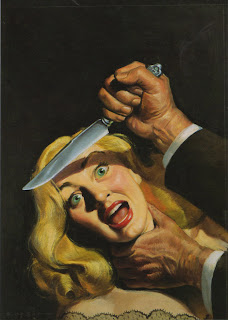 trained for the priesthood but his drive and determination to pursue a career in art and the tacit encouragement of the priest who oversaw much of his development ensured that he would be able to pursue that dream. 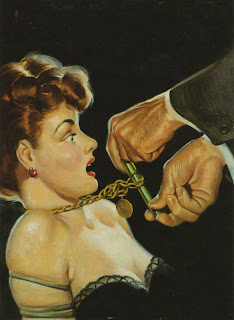 The covers that he produced for these magazines were iconic, swathed in "noir'esque" lighting and hinting at a narrative that went well beyond the immediate impression his stunning artwork created. His work was so arresting that he found himself in the position of creating artwork that would then be given as a springboard for writers, 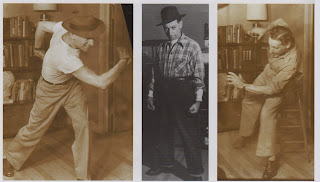 which was a complete reversal of the normal way such artworks are produced. 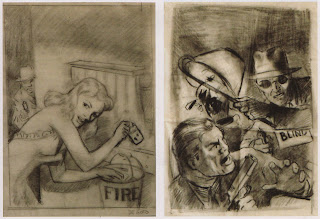 Anyway let's cut to the chase and have a look at some classic Rafael De La Soto. 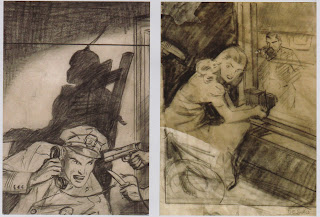 There is a really fantastic essay on this great man by David Saunders (son of another great pulp artist Norman Saunders) in issue number 10 of Dan Zimmer's Illustration magazine and more can be read and seen in Robert Lesser's "Pulp Art" the definitive book on this subject. For UK readers of this blog, both items should be available from The Book Palace, the ultimate UK source for this kind of material. 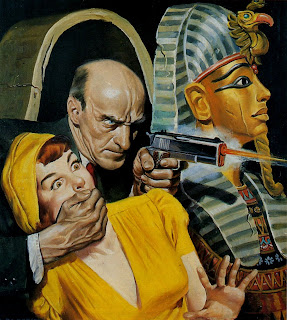 Posted by Peter Richardson at 08:16