The Beguiling Artistry of Pauline Martin 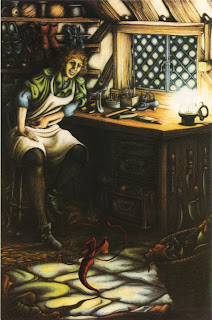 Posting a succession of captivating and darkly unsettling illustrations by Alan Lee, set me to thinking about another illustrator whose work seemed to hark back to a bygone era. In the summer of 1973 as a first year illustration student at Brighton Polytechnic, I and the rest of my contemporaries were in a state of excited anticipation as third year students set about organizing their final shows.

A lot hung on these displays as not only was the work displayed to be judged and graded by the teaching staff, but there were external assessors that needed to be impressed as well as industry movers and shakers such as illustrator's agents and designers seeking new talent for their studios to be beguiled. In truth there was much hanging on the outcome of these shows. 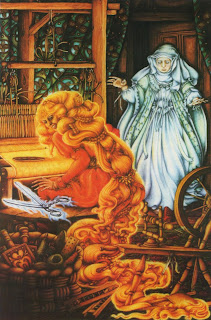 All students would be obliged to focus their show on two projects with supplementary course work as back up. The two projects were:

A). The Major Project. Which would probably occupy much of the third year of the course and would be self-initiated as a showcase and summation of all the skills the student had acquired. 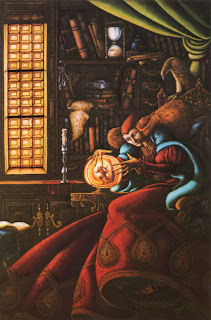 B). The Exam Project. Which was a two week response to an external brief under some title such as "hidden" which all the students would need to respond to. The first hint of the "real" world and I can think of at least one friend of mine who made his first publishing deal on the back of his exam project.

So, as I say it was summer 1973 and the first floor studios at Brighton Polytechnic's concrete and glass edifice were abuzz with activity. When the dust settled we were able to view the product of three years intensive study. As usual much of it was very worthy with the majority of work being well presented and competently produced, but as in the case of all such shows out of a total of 30 something students you are talking in terms of three illustrators and three designers who might go on to make full time careers in their respective fields and we as much as any external assessors could see who those chosen few would be. 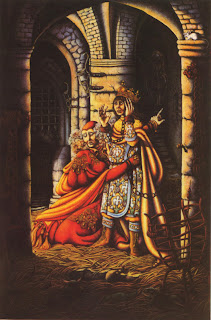 That year in fact there was a slightly higher than average number of illustrators whose folios seemed destined to grant them access to the promised land with publishing deals, agents and in the case of at least one of the students whose work was not only professional enough to open such doors but also nicely unresolved in terms of where she might eventually be going with it all, the offer of a further three years at the Royal College of Art - on a full grant. Those were indeed different days.

However as far as we were concerned the head and shoulders above all other contenders Star Of The Show, was a student by name of Pauline Martin. Her work was just breathtakingly beautiful and was so haunting that one look was not enough. In truth we found ourselves whenever time would allow, going back to the room where her work was on display pouring over every detail of artwork, the like of which none of us had ever encountered.

The subject that Pauline had devoted herself to was a series of six illustrations for the John Keats poem "Isabella and the Pot of Basil". Six illustrations plus vignettes for the text,  printed at the college which had it's own typesetting department. Whereas six illustrations might seem a little minimal, in truth these were paintings of such arresting detail and design that they burned their way into your subconscious in a way that nothing else in those rooms seemed able to match. 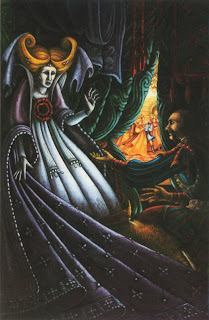 The story of the doomed lovers was a Pre Raphaelite favourite and in mood Pauline Martin's illustrations made even the works by Millais, Holman Hunt and Waterhouse seem feeble in comparison. Her paintings were truly haunting, where shafts of wan light contrasted with areas of lush deep shadow to create an atmosphere of true foreboding. The paintings which were about A4 in size were so compelling that they simply drew you in as you picked out little nuances and semi hidden symbols all pointing to an irretrievably tragic conclusion.

For students of watercolor, her technique was a total contradiction. The way she worked was to place washes of color on clothes and drapes and then "sculpt" them out by wetting her brush and repeatedly lifting of the paint which created a weirdly burnished look to her work. The whole effect was simply hypnotic. 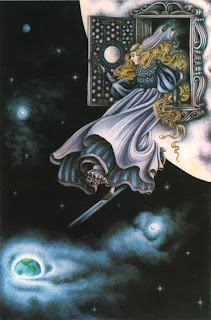 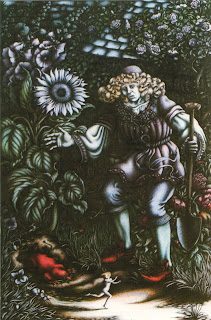 She was already signed up with Jonathan Cape when she left the college and her albeit first small book, was published a few months later as Bamber Gascoigne's novella "Ticker Khan". Another book "Early Rising" followed but it wasn't until 1978 that anything approaching the wonders of her "Isabella and the Pot of Basil" was published. 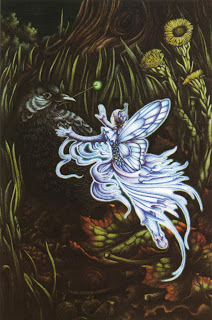 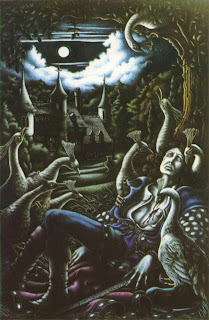 "Moonlight and Fairyland" re-introduced a collection of folk tales by Lawrence Houseman and although I suspect that the book never went beyond a first printing, it still has some superb moments in terms of the artistry of Pauline Martin. It was to be her last book and what became of Pauline Martin after that and why she never felt inclined to pursue her talent beyond these three books remains something of a mystery.
Posted by Peter Richardson at 14:56