Wulf the Briton - An Update 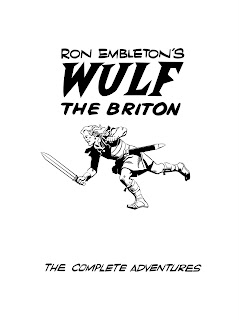 Unbelievably the project that started as a result of postings on this blog has now pretty nearly come to fruition. Bar resolving a couple of additional scans for the limited edition, work on "Ron Embleton's Wulf the Briton - The Complete Adventures" is...

At the start of the exercise, I thought I knew a lot about this amazing strip. At the end of the project I now realize I knew next to nothing, I've since learned a tremendous amount and through the unstinting help of people such as Andrew Skilleter  and Alan Vince who both were close friends of the artist and comics historians Norman Wright and David Ashford and the ever resourceful David Roach, who unbelievably was able to put me in contact with David Slinn, an artist who was working at Express Weekly in the late fifties and early sixties, I have managed to piece together a much more fulsome account of just how this incredible strip was created.

I've also come to appreciate just what an incredibly vital and life enhancing human being Ron Embleton was, everyone I've spoken to who had the privilege of knowing him says the same, he was one of the warmest and most generous people you could ever hope to meet. He was also unbelievably driven, to the point I suspect that he literally worked himself into the ground which was a factor in his sadly all to early death at the relatively young age of 57. 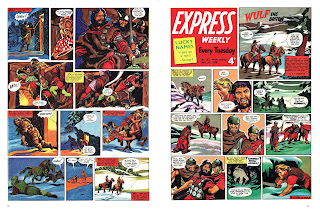 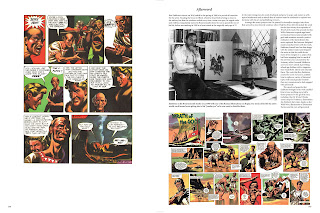 Here are some low res jpegs of some of the scans that went into the production of this book which is going to be a hefty read at 352 pages. We're very privileged to have been able to secure the services of fellow Embleton fanatic, Dave Gibbons to write a foreword to this epic book.
Posted by Peter Richardson at 11:52