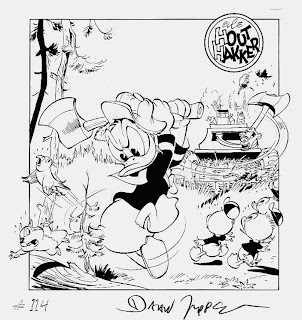 I first discovered the fabulous artwork of Daan Jippes some thirty years ago. It was at a time when there was a revival of interest in Carl Barks but not much in the way of U.S. reprint material to satisfy the burgeoning demand for his work.

In contrast the Dutch publishing house of Oberon, who were totally comic savvy in a way that both the U.S. and the U.K. weren't, were offering up reprints of all Barks work, including stuff that had never been reprinted and was not going to appear any time soon in the U.S. of A.

The problem with some of the material was that Western Publishing considered it to be too racially offensive to risk putting out. This was a pity as however visually stereotyped the characters in question appeared, the stories themselves were free from any nasty traits of condescension and included some real gems, such as "Race to the South Seas".

So the only way you could access these stories was to get the comics in Dutch and then sit down with an Anglo/ Dutch dictionary and piece together the stories as best you could. 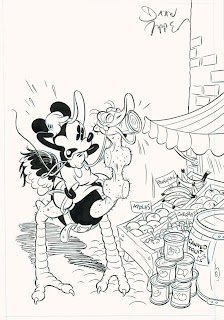 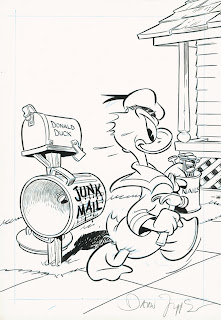 It was here that I discovered the work of Daan Jippes, as in the case of some of the stories the photostats that Oberon were working from were so dilapidated that Jippes was employed to trace them in Bark's style as well as rectifying some of the more overt racial stereotypes.. Not only that but as many of the stories had appeared as giveaways, or in odd formats Jippes was frequently required to provide new covers for the album and comic reprints.

Jippes whose two great influences are Franquin and Barks, has a truly amazing drawing facility, every character that he draws just pulsates with life and his study of Barks use of line weight and body language was such that he could not only render Ducks in Bark's style but also render them to convincingly match the particular era of Barks drawing. 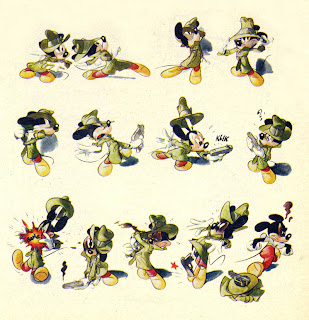 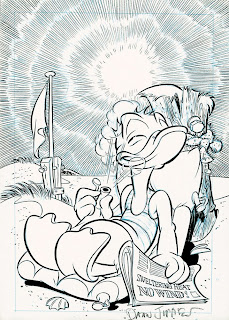 His genius didn't stop there, he could also match Al Taliaffero's Duck drawings from the weekly Sunday strips and Floyd Gottfredson's Mickey daily and Sunday strips all the way from the early thirties to the late fifties. All simply incredible stuff. The inevitable happened and he was whisked away to Southern California to work at the Disney Studios helping out with storyboards and merchandising.

He's now creating a series of albums in his more Franquin influenced style based on detective stories centered around a shadowy character named Carlier by the late writer Havank. 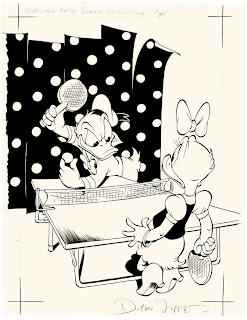 But here in the meantime are some stunning examples of Daan Jippes Disney artistry.

A lot of these F.A./B. artworks are for sale here:

And another blog worth checking out is here: