Prion's War Library Reprints And A Couple of Missing Jewels... 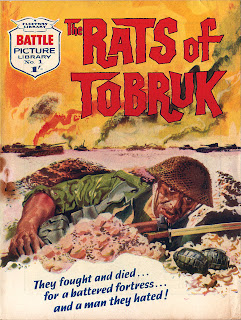 A comment from Mykal regarding his admiration for the U.K.'s war pocket libraries which he sourced via a series of jumbo sized reprints published by Prion and Carlton books reminded me of some unfinished business that attaches to a couple of the volumes reprinting that wonderful series of war comics that flourished throughout the sixties under the title of Battle Picture Library.

The books which are magnificently edited by Steve Holland (famed in the blogosphere for his indispensable Bear Alley Blog) are a really excellent introduction to these comics as he has chosen some truly amazing stories to fulfill the brief of presenting the reader with some of the best stories and artwork to appear in these comics at the peak of their popularity. The stories were in the main written by a generation of writers that had actually seen action as front line troops and as such the stories had an immediacy and authenticity that a lot of subsequent war comics lacked. 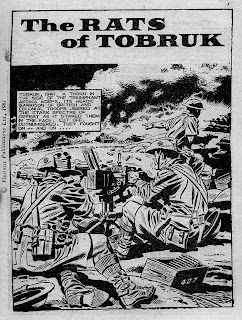 There are several of these collections available via Amazon and they are all well worth picking up. My only (minor'ish) criticism of the earlier ones in the series are that the scanning of the original comics (the artwork having been incinerated in the early '90's at a time when nostalgic collectors would have gladly bought the boards) was cursory to say the least. The second criticism that applies to a couple of the collections was that the proof checking was equally slipshod and as such a couple of pages in two of the volumes; "Death And Glory" and "Up And At Em" were printed twice over and in the process a couple of pages were dropped. Leaving readers with the unsatisfactory experience of having not entirely experienced the stories, "The Rats of Tobruk" and "Death and Glory" in their entirety. 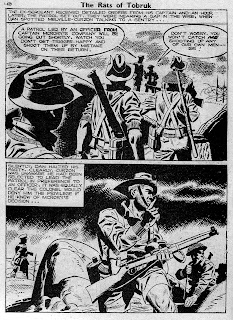 So as a way of redressing this interruption to these stories I have scanned in the pages at high resolution so you can print them off and insert them into your otherwise incomplete books.
The pages in question are "Rats of Tobruk" page 48 and "Death and Glory" page 47. The artwork for these two stories are by two of the most talented artists to work in these comics; Gino D'Antonio and Renzo Calegari. The affinity that they share for dynamic handling of light and sublime action drawing, resulted in them not only sharing studio space but collaborating on D'Antonio's "La Storia del West", a partnership which was eventually interrupted when in 1969  Calegari decided to dedicate the best part of ten years working for the Italian Communist Party.


I've included the title pages of each story just as a taster, so that if you haven't already got these books on your shelves you will feel an irresistible urge to go and order them from Amazon now.


I am also going to present you with the covers in color as an added bonus, so you can see the work of Giorgio D'Gaspari and Allesandro Biffignandi as readers did some fifty years ago. 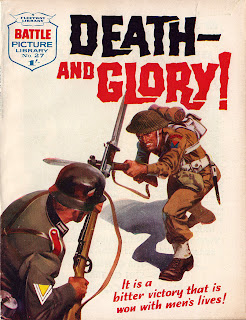 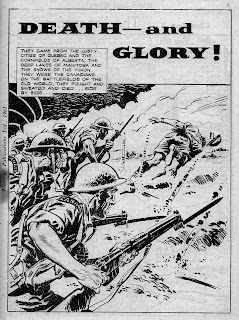 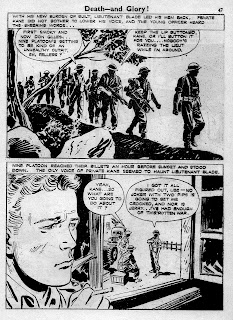 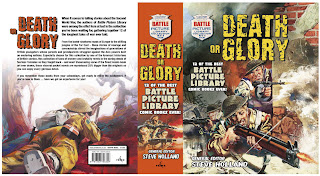 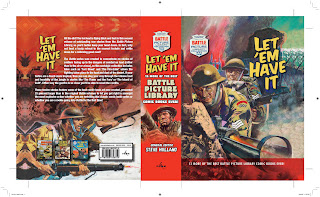 Posted by Peter Richardson at 19:32