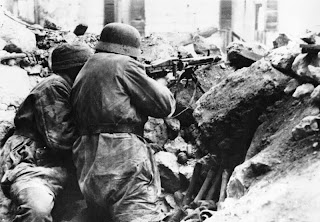 Monte Cassino was one of those battles that resonated in the mind of a generation of school boys brought up in the years that followed the end of the Second World War. Part of the Italian Campaign; Winston Churchill's plan to provide an alternative route to Berlin before Stalin's Soviet hordes could occupy the whole German capital by launching a joint US and UK thrust through the "soft underbelly of Europe" as he rather quaintly put it. The lot of the "D-Day Dodgers" as they were christened, was just dreadful, involving bitter fighting against an implacable enemy through some of the roughest terrain in atrocious weather conditions. The misery being further compounded by the rivalries of the US (Mark Clark) and UK (Montgomery) generals responsible for achieving what was rapidly turning into a Herculean task. 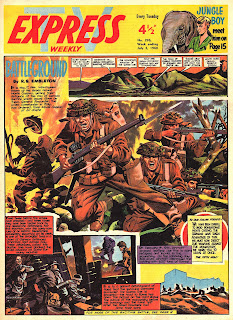 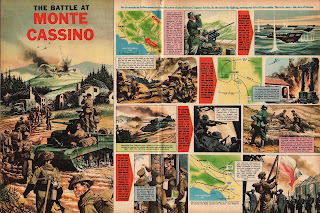 As the Allies worked their way northwards and the terrain became progressively more precipitous, so the campaign bogged down and it was at the abbey of Monte Cassino where the outcome of the whole campaign would be decided.

Here then is more of Ron Embleton's truly astonishing artistry as he visits this battle twice. Firstly in TV Express from 1960 and then some three years later in the pages of Look and Learn magazine.
Posted by Peter Richardson at 19:28