I read somewhere that Ron Embleton really considered that his best tuition was what he learned as a young artist working from the age of seventeen for publishers such as Scion (yup you read all about them on yesterday's blog), before his career was interrupted by a stint of National Service in the jungles of Malaya. As he stated he never responded well to formal tuition and it was really his own studies and drive to better himself as an artist that pushed his work into the premier division. 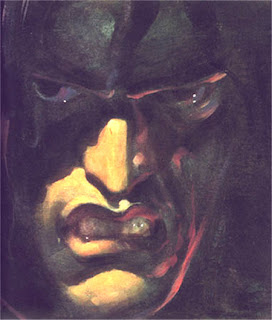 His observations made me think of some of my experiences when as a young and fairly callow illustrator I was invited to lecture on a part time basis at my old alma mater Brighton Art College. The Art College was built in the sixties, designed by Percy Billington in conjunction with Robert Matthew on Brighton's Grand Parade, a mezzanined monument in glass and steel, looking for all the world like an office block, which as some cynics were wont to remark, would greatly enhance it's resale value should the worst come to the worst.

Having been a few years previously through it's light and airy portals it was an opportunity to observe the art education system in reverse, some of the issues affecting art education then are somewhat redundant these days as we're talking thirty years ago and art education along with higher education in general is about to undergo some seismic changes which are going to really stimulate a lot of debate as students and parents

see just how much (or little ) they can expect to receive in terms of education for the increasing amounts of debt they will have to shoulder to accommodate a dwindling public purse whose priorities lie elsewhere.

However that's another discussion for another time, my main concern with this posting is how the art education system responds to genius. It would be nice to think that art colleges in particular can embrace and encourage really

talented students but it is not always so as there is an inevitable conflict of egos and sometimes the drive and determination of young artists to find their own way can be at odds with the demands of the course itself, which as Jarvis Cocker in a Radio 4 series broadcast in 2006, stated has becoming increasingly didactic as Government targets have to be appeased in all areas of the higher education system and that includes art

I happened to be teaching at Brighton when one of the most talented students to ever cross their portals arrived from somewhere North of Watford. John Watkiss was without doubt a truly exceptional talent and his list of subsequent achievements bears testimony to just how amazing he really is. You name it he's pretty much done it, from working as an in-house visualizer at Saatchi and Saatchi (he was signed up before he graduated) to teaching life drawing and anatomy at the Royal College of Art, to working on

numerous graphic novels including Sandman and Conan, to working as a Hollywood concept artist (he it was who provided the springboard for the recent Sherlock Holmes film) as well as wowing the staff at Disney with amongst other great works his amazing acrylic paintings for 'Tarzan', he even painted a mural for The Ford Motor Museum. Books on drawing and anatomy - the list goes on ... and on.

Genius - the only word for it. 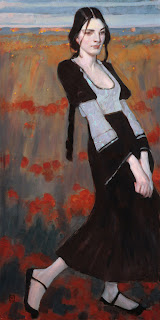 He was bloody brilliant when he arrived at the college and just proceeded to get better and better, but he did things his way and worked like a man possessed, which is what you've got to be to make it into the premier league, which is where he was most assuredly headed. I remember there was one morning I was in the studio and John arrived with a new painting which he'd created in the middle of the night, he fixed me with a look of almost religious zeal as he told me that he'd had this dream of a Daumier'esque scene which he just had to get up and paint ... at three o' clock in the morning! He it was who could also with a brush and ink and no under-drawing create a head and shoulders portrait on top of the image that he could so clearly see in his mind's eye as he stared at a blank sheet of paper. He even had anatomy sketchbooks going back to when he was fourteen - simply phenomenal!!! 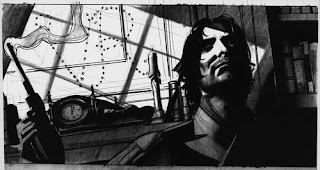 But here's the rub, he was so good that as far as some of the people running the course could ascertain, he was not exactly being shaped by the course. These guys without being too cruel to them, had long ceased to make a living out of plying their trade beyond the confines of the art college, but unlike the part time staff (who were practitioners of illustration) their opinion had weight and this was brought sharply into focus when the final show assessments were being conducted. Quite simply there was a debate about whether or not one of the most stellar talents to pass through the college should receive a first class honours degree as opposed to an upper second and this purely on the criteria of whether or not it could be argued that John had benefited from the course - his talent not being in doubt. 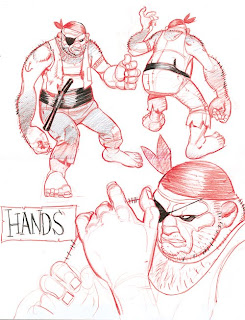 I'm pleased to report that wiser councils did prevail along the lines of an assessment as perverse as that would run the very real risk of bringing the whole course into disrepute, but the fact that such an opinion could even be considered did wake me up to the realities of the kind of hubris which does colour the judgments of some of the people who end up in positions of authority within our education system.

The lesson, if lesson there is, from all this, is that true talent can manifest and develop in a variety of ways and art colleges (or art uni's as they're now rather pretentiously 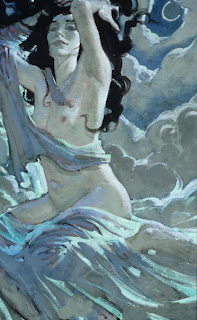 called) need to be more responsive and less didactic to the needs of their students, which means that people such as politicians none of whom I'm aware have ever been to an art college, need to back off and leave the running of these institutions to people who know what they're about and the role of part time tutors needs to be strengthened and not undermined to the extent that is currently the trend with part time tutors now drowning in a sea of unnecessary paperwork and obliged to acquire formal teaching qualifications, partly I presume to justify the ever upward tuition fees to the increasingly pissed off middle classes who have to pay them. 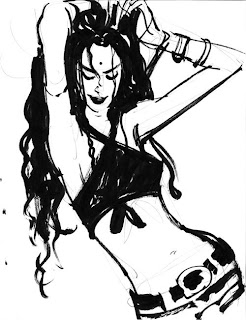 rather than breaking the spine of my Tarzan book) with apologies to whomever and the hope that you'll all enjoy looking at John's fantastic work as much as I do.
Posted by Peter Richardson at 07:20