I can hear it as I type, Dick James singing the song of Robin Hood as Richard Greene pulled back his draw string and unleashed his arrow which hurtled - Pertoingggggg!!!!

Not into the gizzard of some rascally Norman, after all it was Richard Green portraying the Outlaw of Sherwood and being a jolly decent sort of fellow he would only turn the Sheriff of Nottingham's men into pin cushions in extremis. Rather it was the trunk of an old English Oak tree into which the arrow kerzoinked.

The year was 1955 and Lew Grade had gambled a sizeable amount of his resources on producing a TV series which would launch his ATV company into the premier league. Mind you, not that Grade's budgetary commitment was limitless, the tight purse strings plus the even tighter shooting schedule precluded fancy sets, but with the involvement of Hannah Weinstein as producer and some superb scriptwriters including some US wordsmiths whose Hollywood contacts had dried up in the wake of the McCarthy hearings, the series was a hit on both sides of the Atlantic. Much to the relief of Grade and his backers.

Here's an example of the first episode as it was shown on US TV - sadly minus the talents of Dick James, ousted in favor of a sponsor's endorsement for Wildroot Hair Oil. 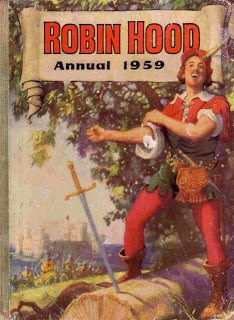 The Rahbinn Hood, phenomenon did not go unnoticed by one of Amalgamated Press's most inspired and visionary editors, Leonard Mattthews. He loved swashbuckling films and literature and wanted to exploit the Robin Hood craze which was gripping the nation. He didn't have the rights to the ATV version of the legend, but that didn't matter, he could create stories around the Robin Hood legend as opposed to the Richard Green portrayal.

And anyway, the version of Robin Hood that Leonard Matthews loved was the Errol Flynn version, which was the motif he impressed on artists such as John Millar Watt, surely one of the UK's most  underrated illustrators, when he commissioned these images for publication in the late 1950's. 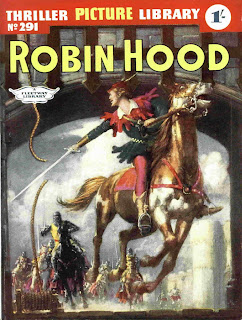 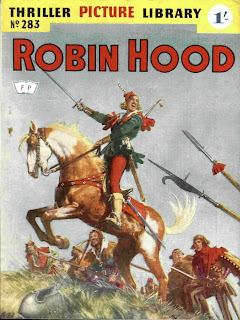 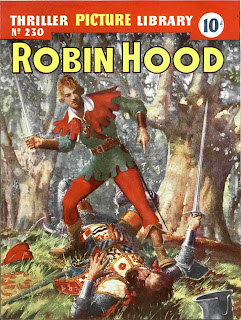